The following debate originally took place upon my Facebook wall, after my friend, and fellow Autistic self-advocate, Jason Ross, posted artwork being shared by the page, “The Free Thought Project“… 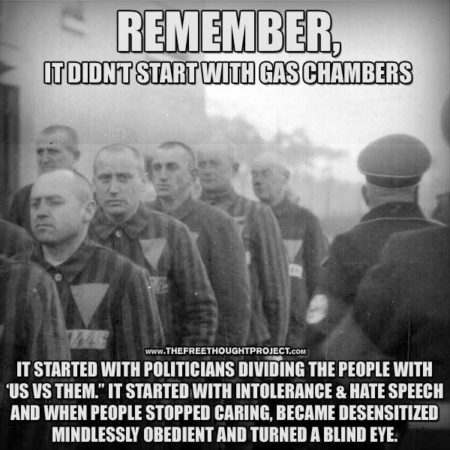 “Remember, it didn’t start with the gas chambers. It started with intolerance & hate speech and when people stopped caring, because desensitized mindlessly obedient and turned a blind eye.”

Jason R.: That’s how America does things and why Trump got a platform in this election 😐

As I wrote in my article, “Democracy and Demagoguery Make a Perfect Team!”:

‘The’ Russians! ‘The’ Mexicans! ‘The’ Muslims! Oh, my! Obviously, these ‘problems’ require massively tyrannical government ‘solutions’! 😉

Democracy and Demagoguery … What a team!”

Katherine C.: It actually didn’t start that way. It started with a monarchy that imposed a useless four year war, and a very tired, very broke people who had no idea what would happen or what was happening half the time. The Nazi party largely played down the anti-Semitic sentiments until they already well in power and after Hindenburg died. Hindenburg was the president and the only one with the ability to fire Hitler. They played nice till after that.

Katherine C.: And from the getgo they intimidated the hell out of people. And not just people, but their families. You’re about to have a kid. If u by merely speaking out against government would land u in prison and ur family killed, what would u do? And this was applied to all Germans, not just the Jews. It’s easy to blame people but u gotta go a little deeper to understand that they were just regular human beings, and the Nazis were lightning fast and brutal.

Rayn: Jason actually posted this graphic here to my wall  this time, Katherine – although I once posted it to my wall, a while back. And, the meme is a reference to the treatment of Jewish people by the Nazi party, under Hitler. It is an attempt to remind its audience that the Holocaust didn’t start with gas chambers, but with Hitler’s scapegoating minority groups (most especially Jewish people) for the complex problems Germany was facing. Germany’s problems, themselves, absolutely began even before Hitler’s rise to power, but that is of little consequence to the theme of the meme, which is to reveal the basic dynamics of demagoguery as a route to mass murder. Historically, demagogues typically seize upon any number of serious problems their nation is facing to begin their tyrannical, and often murderous, rises to power.

Also, from almost the moment Hitler became Chancellor of the National Socialist Workers Party, in January of 1933, he began to enact antisemitism as a matter of State policy – transforming the country into “Nazi Germany” (or the “Greater German Reich”). From the Reichstag fire in February of 1933, to the “Enabling Act” of March 1933, the groundwork was laid for the enacting of Germany’s April 1933 racial hygiene laws, and at the same time, the laws against non-Aryan civil service. These major foundations were established a full year before Hindenburg died. Feel free to “go a little deeper,” yourself, and read about the sequence of events here:

You can claim the German citizens to be “very broke people who had no idea what would happen or what was happening half the time,” and sympathize with them as “intimidated” victims of the State, but you should also understand that Hitler actually committed none of the State’s 12 million murders himself, and his cabinet and officers did very little of the killing, either. It was an entire country of military draftees, mostly men, who were “following orders” that did so. And, they ALL share in the responsibility of the crimes of the State. You can rest assured that during the Nuremberg Trials against the crimes of the Nazi party, all attempts of soldiers, and even Nazi party officers, to shift blame onto their superiors, and onto Hitler, were fully rejected by the entire international community as a legitimate form of defense. Then, truly recognize that these soldiers, whether “intimidated” or otherwise, actually had superior numbers, and being armed by the State, itself, could have easily risen up against the Nazi party, but instead, remained either nationalistic, and apathetic to detractors and outsiders, in their subservience to a “greater cause.” In taking this role, those who participated in the crimes of the State felt no morally responsible for their actions, enabling them to shift the blame onto those giving the criminal orders.

Herman Goering at the Nuremberg Trials, famously said, “Why, of course, the people don’t want war. Why would some poor slob on a farm want to risk his life in a war when the best that he can get out of it is to come back to his farm in one piece. Naturally, the common people don’t want war; neither in Russia nor in England nor in America, nor for that matter in Germany. That is understood. But, after all, it is the leaders of the country who determine the policy and it is always a simple matter to drag the people along, whether it is a democracy or a fascist dictatorship or a Parliament or a Communist dictatorship. Voice or no voice, the people can always be brought to the bidding of the leaders. That is easy. All you have to do is tell them they are being attacked and denounce the pacifists for lack of patriotism and exposing the country to danger. It works the same way in any country.”

To answer your question, “if u by merely speaking out against government would land u in prison and ur family killed, what would u do?” Man… you really don’t know or understand me, whatsoever. You want to get me put on a list, or something? LOL! 🙂 Fine. I have no fear of it, and will reveal my plan. Here’s what I would do. I would write down all of my protests against government, then publish them on a website (hint, hint… 😉 ), or I’d post them, in print, and distribute them among my friends, and any interested parties, if the first option wasn’t available. I’d also speak about my grievances often, to any who bring up the topic. Then, I’d sit in my home, armed and ready, just waiting for the jack-booted criminals to dare come falsely imprison me, or take my family hostage. BOOM! Instant martyrdom! My family and I get to go to our eternal home with our souls still intact, completely secure in the knowledge that we were not captured by savages, who would likely torture us, abuse us, brainwash my child, or force us all to commit egregious crimes against other human beings, to “save” what would become very miserable “lives.” The soul, and the peaceful free-will that defines it, is priceless, while the body is just its vessel. My soul, the souls of my family members, and all souls, in general, are bound by this equation. Best believe that I would not give up my free-will guided soul for a body that I no longer even have sovereignty over. That is not “life,” nor is that “living,” so I would save literally NOTHING, and lose almost EVERYTHING, in making such a deal! It’s a slave’s bargain, and I would never consent to such a pathetic arrangement! My huband can attest to this truth about me, easily, and I can even tag some a family member, and a friend to verify my long-standing views, if you’re not convinced. Previously, in March of 2009, when I was abducted and falsely imprisoned by State criminals for possessing a non-toxic plant, I immediately began a hunger strike, with no plans to desist. My family manged to have me released just three days later, but if I had remained in a cage, I would have been perfectly content to die, knowing I was innocent, and that my kidnappers were merely criminals, with no real power over me. I know my Father, and where I came from, so death has no sting, for me.

I know. I know. Not everyone has my convictions to resist Nazi-like tyranny. So, take the example of Denmark, and learn the intriguing lesson of how they cleverly fought Nazi terror…

Disobedience and Super-Obedience are Two Major Weapons in the War Against Injustice:
http://acidrayn.com/2016/08/10/disobedience-and-super-obedience-are-two-major-weapons-in-the-war-against-injustice/

The Germans could have done this sort of thing, even, too… But, they chose intolerance and apathy towards minority groups, along with obedience to the State, as the ultimate Authority. (Click Here to Continue Reading This Post) →