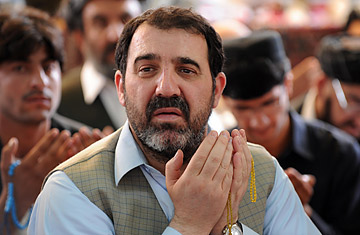 (Paul Joseph Watson, PrisonPlanet.com) – A bombshell article in today’s edition of the New York Times lifts the lid on how the brother of Afghan President Hamid Karzai, a suspected kingpin of the country’s booming opium trade, has been on the CIA payroll for the past eight years. However, the article serves as little more than a whitewash because it fails to address the fact that one of the primary reasons behind the 2001 invasion of Afghanistan was the agenda to reinstate the Golden Crescent drug trade.

“The agency pays (Ahmed Wali) Karzai for a variety of services, including helping to recruit an Afghan paramilitary force that operates at the C.I.A.’s direction in and around the southern city of Kandahar, Mr. Karzai’s home,” reports the Times.

An October 2008 report from the Times reveals how, after security forces discovered a huge tractor-trailer full of heroin outside Kandahar in 2004, “Before long, the commander, Habibullah Jan, received a telephone call from Ahmed Wali Karzai, the brother of President Hamid Karzai, asking him to release the vehicle and the drugs.”

In 2006, following the discovery of another cache of heroin, “United States investigators told other American officials that they had discovered links between the drug shipment and a bodyguard believed to be an intermediary for Ahmed Wali Karzai.”

My Commentary: While some would call Ahmed Karzai, brother of Aghanistan President Hamid Karzai, a drug-smuggling Opium Kingpin, our CIA prefers the term “employee.”