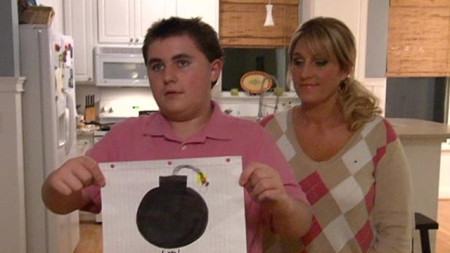 And, THIS is brain-dead bureaucracy in action, my friends!
“Zero tolerance”? Ha! Try: ZERO INTELLIGENCE!

Adam G.: I think it’s more ableist, victim blaming structures in action that support bullying. Rather than being concerned that there are things pushing students to mass violence, they just want to focus on the mass violence, so they have these asinine no tolerance policies against anyone who makes reference to violence instead of bring the (sometimes metaphorical) actual bullies down to the office for torturing students so badly that they try to kill themselves or others.

Genaire: I don’t disagree with your first comment, Adam, but how are Rayn’s words ableist? It does seem pretty brain dead to suspend a student for a harmless picture. I’ve drawn several pictures of guns, bombs and other weapons while in class never would I have imagined getting suspended for it.

Rayn:  I understand where you are coming from with your first comment, Adam, although I’m not so sure this has to do with student bullying. In order to punish the student mentioned in the article, the school utilized their “zero tolerance” for weapons on school grounds policy. And, apparently, according to this mindless set of rules, a drawing of a weapon is virtually indistinguishable from the real thing…

As a matter of fact, the “zero tolerance” for weapons on campus policy is so cold and thoughtless, it has even been used by school officials to demand that a deaf child modify the way he signs his name, since one of the letters involved apparently “resembles a shooting gun” to these bureaucratic robots…

Also, to clarify my words, since their meaning appears to be completely lost on you: bureaucracy isn’t actually alive, so it doesn’t really have brain function, while a policy isn’t actually capable of intelligence, so it registers as “zero.” With this in mind, understand that I very purposely labeled these two non-corporeal entities with the thinking and reasoning level of THE DEAD – utterly and completely non-existent! And, I spent a while tweaking my comment, in order to get the results you see, trying out multiple terms in the process – including “zombie,” “mindless,” “brainless,” and so on. However, none of them did my sentiment any justice, and so, were rejected in favor of my final two choices. I fail to see how they could be viewed as “kinda ableist,” since I have never before seen or heard either of these two terms being used to describe the disabled. (Click Here to Continue Reading This Post) →