“They didn’t kill him.. He was able to talk so therefore he could breathe.. He was breathin on the way to the hospital.. He died because he was fat.. He should have obeyed a lawful order.” “You people are so ignorant… He didn’t die from being choked.. He died from a heart attack… He was fat!” “I say his unhealthy fat attributed to his own demise. he should just not resisted and he wouldnt have stressed to death” “Only victims here are the cops” “When are we going to train Americas to stop resisting arrest ?” “He was 6-4 and 300 lbs what do you expect the cops to give him a king size twix and take him in? No” “Not to mention that if he was saying he couldn’t breathe, he obviously could. You can’t speak if you can’t breathe.” “His fat unhealthy body killed him” “he died because he was fat and had a heart attack, the choke hold was less than 15 seconds” “normal people would have submitted to any police questioning in a rational manner, he was a thug and died the thug life”

My Commentary: Read the two articles below, then check out the artwork above…

As I scrolled through my Facebook news feed, I discovered the following artwork here, being shared by the page, “We Copwatch,” and originally posted it to my own wall, along with commentary… 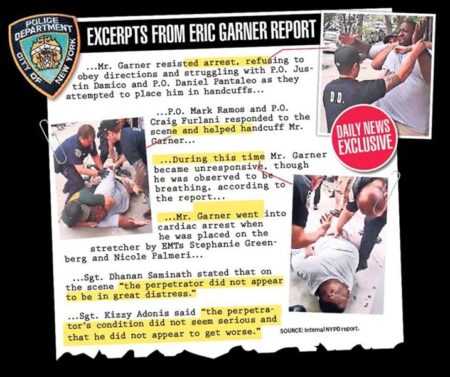 “Exerpts from Eric Garner Report: …Mr. Garner resisted arrest, refusing to obey directions and strugging with P.O. Justin Damico and P.O. Daniel Pantaleo as they attempted to place him in handcuffs… …P.O. Mark Ramos and P.O. Craig Furlani responded to the scene and helped handcuff Mr. Garner… …During this time Mr. Garner became unresponsive, though he was observed to be breathing, according to the report… …Mr. Garner went into cardiac arrest when he was placed on the stretcher by EMTs Stephanie Greenberg and Nicole Palmeri… …Sgt. Dhanan Saminath stated that on the scene ‘the perpetrator did not appear to be in great distress.’ … Sgt. Kizzy Adonis said ‘the perpetrator’s condition did not seem serious and that he did not appear to get worse.’ “