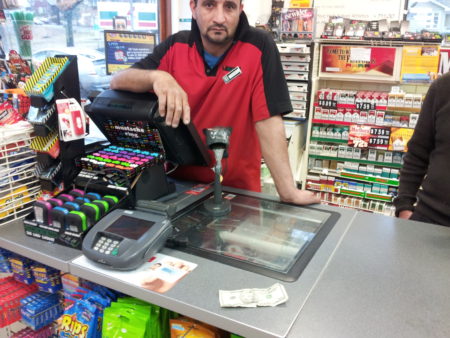 The worthless cashier working at the Jackson Avenue 7-Eleven in Rutherford, New Jersey, refused to accept my $50 bill, today, claiming it to be “fake.” After a short debate, I finally demanded he settle the issue by simply testing my cash. Shockingly, he then proved himself as even more useless than I originally suspected. Upon reluctantly retrieving the store’s counterfeit-detecting pen from next to the register, he proceeded to swipe it across the bill multiple times, striping it with a row of faint yellow lines. Then, with a look of confidence, he told me that the pen was “broken,” and he still could not accept my money. By this time, a line was forming, and the manager had even moseyed over, though he was merely was watching the whole exchange, without saying a word. Incredulous, I explained that his pen had proven my cash to be real. However, he maintained his claim that it was broken. I told him that he was completely incompetent, then snapped a quick photo of the scene, for the record.