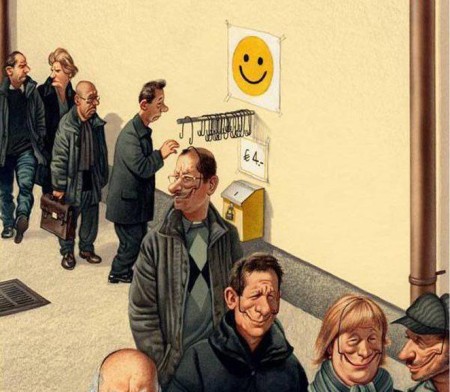 My Commentary: Put a SMILE on that grill! Psychopaths Rule the World, but if you work hard enough for your corporate masters, you can comfortably retire at the ripe old age of 70 years old!

The following debate originally took place on my Facebook wall, upon my post, “Obama’s Embrace of a Bush Tactic Riles Congress“…

First, Obama maintains Bush’s wars of aggression in Iraq & Afghanistan. Then, he begins the bombing of Pakistan. After this, he continues on with Bush’s agenda of bailing out the thieving Banksters & corrupt Corporations with our tax dollars. Now, in another act of sheer disregard for the will of Americans, Obama is embracing the Bush tactic of using “signing statements” to overturn portions of Congressional bills that he personally doesn’t approve of!

Remember, during his presidential campaign, Obama claimed that the use of signing statements was an executive “abuse” & an effort by Bush to “accumulate more power in the presidency.” He promised that he would not take the same path, which he considered “an end run around Congress,” but instead, would “obey the Constitution”:

Understand that this is a BIPARTISAN ISSUE! Republicans & Democrats alike are understandably upset! Obama is turning out to be A PURE FRAUD, like BUSH!

When are people gonna stop embracing the FALSE LEFT-RIGHT PARADIGM and realize that the real equation is THE PEOPLE vs. THE AMERICAN CORPORATION-STATE?

Kenny C.: i see that shit, its sad because i thought this guy was one of us, down to earth person that came from the same situation we did, and would use that to help the common american.

i guess the $$ started floating infront of his face, what man can resist the urge to rob the tax payers?

i know i can, but politicians, can not and will not ever.

1 last thing is that, sad to say, this country is now a lost cause. obama is rising the deficit to outrageous numbers, he dont care because he wont be re-elected to have to deal with the debt.
however us, and our children are going to have a hell of a time with conflicts with china, and others that own our debts.
Obama said he was going to end the war, not provoke more wars.
and these idiots that declared war in the first place, did they not think it would piss these people off
did they not think these ppl have nothing to lose, losing their families to us air strikes, home invasions..
now we have life long enemies out there, instead of resolutions!

Rayn: Obama is nothing like us. He’s just another rich puppet, serving only the interests of his corporate masters. He was never a real peace candidate.

Many people fail to realize that the FALSE RIGHT-LEFT PARADIGM is exactly what keeps us all distracted while THE STATE robs US simultaneously of our freedom & wealth. During last year’s election, just about every candidate covered and pushed by the media, including Obama, wanted WAR, while the few that didn’t (Ron Paul, Cynthia McKinney, Mike Gravel & Dennis Kucinich) were painted out as kooks, fringe elements & longshots. And, remember, this is the same slanted, complicit, uninvestigative mainstream media helped push Bush’s WMD lies to the public in order to garner support for the war in Iraq! If we are to understand anything about what is going on in the world, we must turn to alternative sources for our news! If not, prepare to be suckered into more wars, less freedom, more bailouts for the rich, less jobs, more Corporatism & cronyism, and the eventual self-destruction of our American Republic!