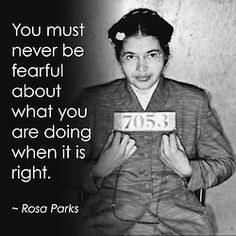 “You must never be fearful about what you are doing when it is right.” – Rosa Parks

Taking a brief moment to celebrate the revolutionary nature of Anarchy, in between wholeheartedly defending the State as a “lawful authority” and a “necessary evil,” enacted to protect society.