The following debate originally took place on my Facebook wall, upon my post, “The Doublethink is Strong Among Neo-Liberals“…

Rayn: The Doublethink is strong with this one! 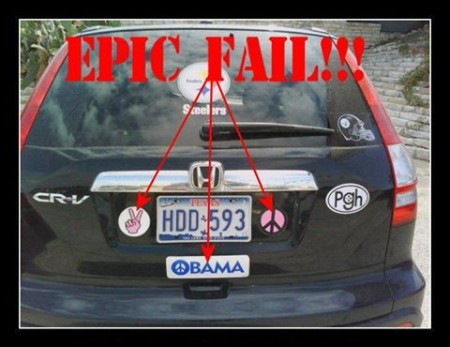 Katherine C.: Ok, you do realize that no matter what president we get, given the history and present state of the US and the world, and everything the US has dipped its hand into, some form of war is pretty much inevitable.

Jordan K.: Cancer pretty much inevitable too, does that mean we accept it or should we keep trying to find a cure?

Adam G.: Regardless of which party is in control, capitalism needs war and imperialism to stay alive.

Rayn: Of course, Katherine, you comment begs the question: “then, why does the Texan above have a bumper sticker containing the name ‘Obama’ with the a peace sign inside of the ‘O’?” An even better question would be, “why did Obama receive a Nobel Peace Prize, then, if he simply continued this ‘inevitable’ war you speak of?”

Either way, I reject your fallacious Appeal to probability as a cause for inaction, Katherine, and replace it with logic. Slavery is at an all-time high right now in the world. Should we apply your faulty reasoning to this issue, as well, so as to wash our hands of the matter, and do nothing about it? I mean, it’s going to happen anyway, so why bother, right? WRONG!

And, while you may claim that no matter which president gets in, there will be more war, this is actually just Circular reasoning. Since 2004, the public has consistently been presented with a False dichotomy wherein BOTH of the major party primary candidates are PRO-WAR! We have NO IDEA what would take place if this “framing” of the issues were not taking place – with the full support of the mainstream media monopoly!

When our government engages in War Crimes and Crimes against peace as a BIPARTISAN matter of policy, it is completely illegitimate, unacceptable and repugnant, deserving neither our respect, our support, nor our tax dollar funding, as Americans! (Click Here to Continue Reading This Post) →