That Which is Legal for Government, But Illegal for Citizenry

As I scrolled through my Facebook news feed, I discovered the following artwork here, being shared by the page, “Americans United Against the United States of America,” and originally posted it to my own wall, along with commentary… 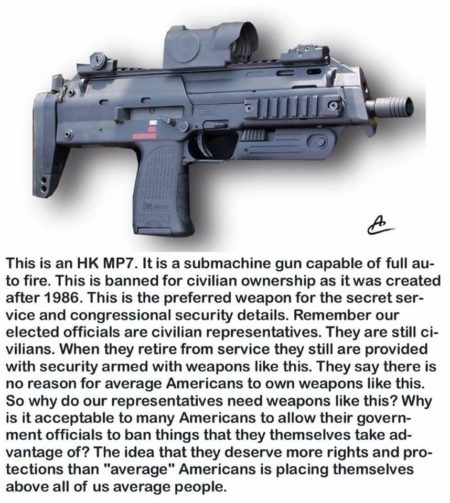 “This is an HK MP7. It is a submachine gun capable of full auto fire. This is banned for civilian ownership as it was created after 1986. This is the preferred weapon for the secret service and congressional security details. Remember our elected officials are civilian representatives. They are still civilians. When they retire from service they still are provided with security armed with weapons like this. They say there is no reason for average Americans to own weapons like this. So why do our representatives need weapons like this? Why is it acceptable to many Americans to allow their government officials to ban things that they themselves take advantage of? The idea that they deserve more rights and protections than ‘average’ Americans is placing themselves above all of us average people.”

My Commentary: There are two sets of laws – one for the “elect,” with their mercenaries – and one for the serf… Strangely, most Americans defend their position as second-class citizen!