Discussing a Flagstaff, Arizona Officer’s Attempt at an Unlawful Arrest Against an Innocent Woman, and His Execution of a Punch to Her Face While She was Restrained 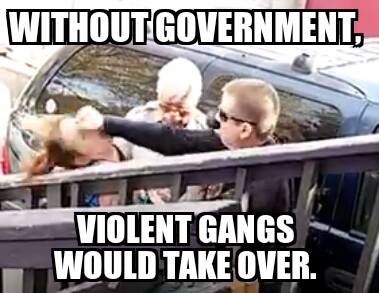 “When a person, being without fault, is in a place where he has a right to be, is violently assaulted, he may, without retreating, repel by force, and if, in the reasonable exercise of his right of self defense, his assailant is killed, he is justified.” Runyan v. State, 57 Ind. 80; Miller v. State, 74 Ind. 1.

“These principles apply as well to an officer attempting to make an arrest, who abuses his authority and transcends the bounds thereof by the use of unnecessary force and violence, as they do to a private individual who unlawfully uses such force and violence.” Jones v. State, 26 Tex. App. I; Beaverts v. State, 4 Tex. App. 1 75; Skidmore v. State, 43 Tex. 93, 903.

“An illegal arrest is an assault and battery. The person so attempted to be restrained of his liberty has the same right to use force in defending himself as he would in repelling any other assault and battery.” (State v. Robinson, 145 ME. 77, 72 ATL. 260).

Rayn: Many don’t seem to be aware of this fact, but even in cases where a LEGITIMATE arrest is being made, it is not actually an officer’s job to strike a suspect merely for resisting, nor even for being combative, either. When a suspect resists arrest, or becomes combative, an officer is only permitted to use the reasonable force required to subdue, handcuff, and transport that individual to the police station, where they will then have “resisting arrest” and possibly, “assaulting an officer,” added to their original charge(s). In almost all cases, except when a dangerous weapon is furnished by the suspect, (or, more rarely, when angry crowds begins to gather around the scene), the force used by an officer should only match the level of force that the officer is experiencing from the suspect. Since this woman had not struck the officer in the face, and both of her hands were being actively restrained by him and the other officer on the scene (incidentally, illustrating that he already had backup, too), he had no legitimate cause, whatsoever, to punch her directly in the face with a closed fist.

The officer’s claims that the woman kneed him in the leg and groin several times, if taken to have even any merit, at all, only really suggest that he was seeking revenge upon her, rather than attempting to subdue her for arrest. In either event, we are witnessing a clear case of excessive force.

Of course, I should point out that, in the video, the officer punches this woman in the face exactly as she finishes stating, “you cannot arrest me until I know I have a warrant.” The very idea that this woman happened to be repeatedly kneeing the officer in the groin, just out of camera view, while in the process of pleading her case to him using logic, is both illogical, and also, convenient, making the officer’s claim dubious at best. His allegation is especially suspicious when considering two other factors… For one, the officer makes another, awfully convenient, claim that this woman “appeared to be intoxicated on a stimulant drug, and exerted an impressive amount of strength for a woman her size,” which operates as both a smear campaign against the woman’s character, and a justification for his use of excessive force against her. Secondly, it is highly suspect, and once again, convenient, that the officer “was wearing a body camera, but according to his own police report, he turned it off before approaching” this woman, as reported here:

Then, after he finished assaulting this woman, he turned the camera back on, right after she was placed in handcuffs:

I didn’t know if the warrant was legitimate. That makes sense about that law,

And I agree on the use of force thing. That’s why I said taser if she was truly kneeing him in the crotch. But the use of a punch was disgusting and useless in all cases. Sorry I didn’t make that clear.