Debunking Leftist Lies and Shutting Down Shameless Promotion of Hillary

If we have to go to foreign media to get the real truth, then how are we any different from the Soviet Union?

Daniel F.: So you cite a Russian propaganda outlet to try to make some “point”? Hillary may have been careless and irresponsible with an email server, but at least she’s not a puppet of a foreign dictator.

Daniel Sv.: You’re right, she’s more of a puppet to globalist masters with no loyalty to any country.

Rayn: Much to the chagrin of detractors, who rely solely upon the fallacious “argumentum Ad hominem” as an imagined form of “logic,” without even bothering to read even a mere two sentences into the news piece you’ve posted, Daniel, the article actually cites polling data from Rasmussen Reports.

For those unaware, Rasmussen Reports is an American company founded in 2003, and headquartered in Asbury Park, New Jersey. As stated on their official website, they are “a nonpartisan electronic media company specializing in the collection, publication and distribution of public opinion polling information.” Here is the likely source of the information discussed in the RT article…

Most Still Say Clinton Should Have Been Indicted:
http://www.rasmussenreports.com/public_content/politics/elections/election_2016/most_still_say_clinton_should_have_been_indicted

Genaire:  Where is your proof Daniel F. that: one Trump is a puppet of a foreign dictator, two that RT has put out news that has been anything less than truthful. Side note the Russian leader was democratically elected not a dictator like you mentioned. I’m not a fan of either Hillary nor Trump and I would love to see Hillary behind bars and I know many that feel the same way.

Now you want to see proof of a candidate being a puppet of a foreign dictator here you go:

Foreign Government Gifts to Clinton Foundation on the Rise:
http://www.wsj.com/articles/foreign-government-gifts-to-clinton-foundation-on-the-rise-1424223031

Daniel F.: The fact that Trump has constantly been praising Putin, and that Russia seems to have an unusual interest in the result of this election – so much so as threatening World War III if Hillary wins.

That, and everything about Trump’s business dealings would indicate he doesn’t have nearly as much money as he claims to, given how whenever the bill for anything comes due he always looks to get out of paying. Where’s all that money he claims to have actually coming from? And why won’t he release the tax returns?

And you know who has been backing all of these extreme far right parties in Europe that have been gaining in power recently? Putin, that’s who.

Genaire: Daniel F., praising someone is not proof of being a puppet. Hillary herself will be the one that instigates war just like any and every other conflict we’ve found ourselves in. She has given support to every war we’ve been in. Our invasion of Libya Obama said was the wise decision if his presidency was spurred on by war monger Hillary.

Being broke or not having as much money a one would think again is not sign of being a puppet. On the other hand we know where all of Hillary’s money is coming from: various corporations and yes other nations.

Again no sign that Russia is in control of Trump.

Daniel F.: We didn’t “invade” Libya – we got Qaddafi’s own people to overthrow him. Still, it wasn’t a good idea (at least knowing what people without the highest levels of government security clearance know)

One thing that would not surprise me if it actually turned out to be true: that the United States’s involvement in the Middle East and all that is about ensuring that the dollar remains as the world’s reserve currency because if were to ever stop being the world’s reserve currency then our entire economy would completely collapse (though I suspect that there are some here who would actually like to see that happen).

Genaire: Us fomenting war is the same as us going in ourselves it’s all acts of war. This particular act of war was spurred on by war monger Hillary.

Our economy is propped up through war. All of our industry has been shipped over seas I know I can’t tell you how many loads I bring down to Mexico. So yes if losing the dollar as the world’s reserve currency means we will now have to mind our own business and stop nation building I’m all for it.

Daniel F.: And just how much misery would you be willing to suffer as a result?

Genaire: Why is my misery any more important then the misery we are currently inflicting on others. I personally say round up all the pigs involved in our illegal wars of aggression and punish them. Starting with Piglary.

Daniel Sv.: While Trump has more bluster and a bullying attitude, he is actually the more peaceful candidate. He has campaigned against more useless foreign wars as they leave us in endless quagmires and cost us money while he wants to devote resources to fix up the country. Hillary would not only continue our perpetual war scheme, she would take this country to the edge of war with Russia. The neoconservative clique that surrounds her has a bizarre hostility to Russia. If anything, the US has had more of a hostile attitude in baiting Russia. Their only sin is that they refuse to follow the globalist model under American leadership. Hillary may think her warmongering attitude is a tactic to scare Russia, but she will be surprised when Putin strikes back as Putin is no pushover compared to the middle eastern dictators we took out.

Daniel F.: That’s because Trump is Putin’s puppet, so of course he isn’t going to stand up to Putin’s aggression. Russia has been the aggressor here, despite what all the pro-Russian mouthpieces have been spouting. Putin is the one who annexed the Crimea and has been making making threatening overtures toward Ukraine and the rest of Europe. Putin wants to restore Russia to its former glory from the days of the Soviet Union – problem for him is that the former Soviet satellite states are now members of NATO – which presents a huge cock block toward his ambitions.

He has also somehow managed to manipulate public perception so that when western nations and our NATO allies bolster their defenses in response to Putin’s saber rattling that THEY are the ones who look like the aggressor.

Daniel Sv.: What is the proof he is Putin’s puppet? Why would he even decide to be one? Trump is not the type to be led around by others.

Daniel Sv.: Also, Putin has not made aggressions towards the Eastern European countries. He’s not trying to reconquer territories that the Soviet Union once held (which were held more mainly as buffer states than as conquered land). Putin is mainly concerned with countries that hold Russian populations.

Not that he is a completely wholesome person, but he is mainly a nationalist figure. Our diplomacy should be conducted on that basis, not as a person to be isolated because he failed to bow before the globalist order.

Daniel F.: Trump is only out for himself. If doing what Putin wants will further his own position, then that is what he will do.

Of course it is possible that Putin is playing Trump like a fiddle, and Trump is too arrogant and narcissistic to even realize it.

Daniel Sv.: Trump’s support of Putin is more of the fact that he believes in seeing nations as nation-states, on whom one conducts diplomacy on equal footing. It probably is more the case that Trump doesn’t admire Putin so much as respect him. Putin has proven himself to be a strong leader, so on that basis, Trump is trying to respect him as an equal.

Daniel Sv.: In the final analysis, whether you are pro or anti-Putin, you can’t afford to bluster with a leader who commands the biggest nuclear arsenal. Some form of subtle diplomacy is needed.

Daniel Sv.: Incidentally, I would make the case that our totalitarian structure that underlies our political correctness is driving this hostility. In previous times, leaders were more likely to be the realpolitik variety who made agreements that reflected each other’s interests. Now today, our leaders are more ideological which makes them dangerously delusional and inflexible in dealing with other countries. Those perceived as violating gay rights, woman rights etc. are treated as non-entities who must be treated harshly. In fact, I think our leaders during the Cold War, especially so-called warmongers like Reagan were more realistic in negotiating than our leaders today.

Thomas Pa.: Gary johnson is the most peaceful because he can’t find any other countries to bomb them. Drawbacks include, might send troops to Antarctica to combat global warming

Thomas Pa.: Jill stein has already won the most important contest and become president of my heart (call me, jill) 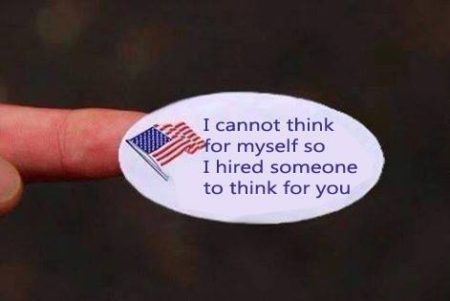 “I cannot think for myself so I hired someone to think for you”
(Artwork originally located here, as a comment upon another post)