An Answer So Easy, a Glowing, Orange Caveman Can See It! 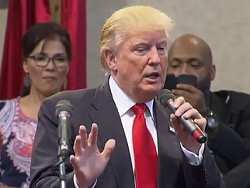 (Ed Krayewski) At a rally in Ohio this morning, Donald Trump addressed the police shooting of Terrence Crutcher, whose car had broken down on the road and who had his hands up when he was shot, in Tulsa on Friday. Trump said it looked like Crutcher had done “everything he was supposed to do.” Some police apologists had pointed to Crutcher moving away from police with his hands up, and thus not following orders, as a justification for his shooting. The video was posted on Twitter by NBC Nightly News.

Trump also suggested the officer who fatally shot Crutcher had “choked” (he had previously described the police officers who shot and killed Alton Sterling and Philando Castile in the same way) and should not be employed as a police officer. “Was she choking? What happened?” Trump asked in his usual extemporaneous manner. “But maybe people like that, people that choke, people that do that maybe they can’t be doing what they’re doing, okay? They can’t be doing what they’re doing.”

My Commentary: An answer so easy, a glowing, orange caveman can see it!