The following debate originally took place upon my Facebook wall, after I shared artwork posted to the page, “Anarchist Memes” by a fan… 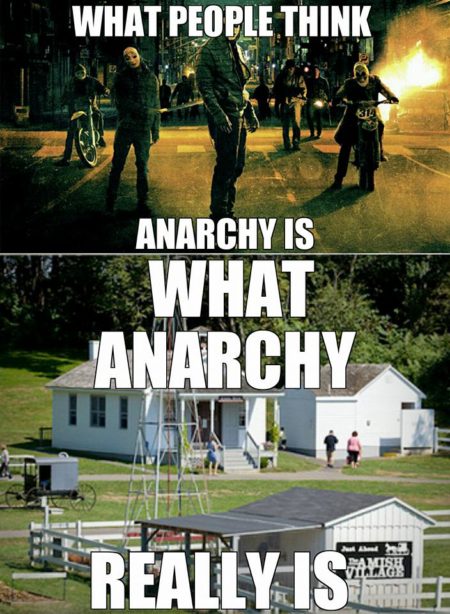 “What people think Anarchy is
What Anarchy really is”

Murilo M.: I like your posts Rayn, but this is one I have to disagree with. How can you be sure? Have you ever seen a country in which anarchy worked well?

Rayn: “I am often asked if anarchy has ever existed in our world, to which I answer: almost all of your daily behavior is an anarchistic expression. How you deal with your neighbors, coworkers, fellow customers in shopping malls or grocery stores, is often determined by subtle processes of negotiation and cooperation. Social pressures, unrelated to statutory enactments, influence our behavior on crowded freeways or grocery checkout lines. If we dealt with our colleagues at work in the same coercive and threatening manner by which the state insists on dealing with us, our employment would be immediately terminated. We would soon be without friends were we to demand that they adhere to specific behavioral standards that we had mandated for their lives.

Should you come over to our home for a visit, you will not be taxed, searched, required to show a passport or driver’s license, fined, jailed, threatened, handcuffed, or prohibited from leaving. I suspect that your relationships with your friends are conducted on the same basis of mutual respect. In short, virtually all of our dealings with friends and strangers alike are grounded in practices that are peaceful, voluntary, and devoid of coercion.” – Butler Shaffer

Rayn:  “Until shortly before the common era, the very last 1 percent of human history, the social landscape consisted of elementary self-governing kinship units that might, occasionally, cooperate in hunting, feasting, skirmishing, trading, and peacemaking. It did not contain anything one could call a state. In other words, living in the absence of state structures has been the standard human condition.” – Yale professor, James C. Scott

Has Anarchy Ever Existed Before?
https://theruleoffreedom.wordpress.com/2012/06/11/has-anarchy-existed-before/

From the article: “Scott’s book is called the Art of Not Being Governed: An Anarchist History of Upland Southeast Asia. In it, he explains the history of the politically autonomous region of different ethnic groups in the highlands of Southeast Asia (dubbed Zomia in 2002), who descended from groups that left the lowland state. The people of the whole region reorganised their social structures, folklore and agriculture to be inaccessible to the state.

When the state attempts to incorporate stateless people, it clothes its actions in the language of civilising the barbarians: development, economic progress, literacy, and so on. However, it inevitably does so by force. Those escaping predatory states were runaway conscripts and slaves, war refugees, religious minorities and those fleeing taxes, and others who predicted the same fate for themselves.

Their social structures presented no hierarchy that encroaching states could have used as agents of control. ‘Their subsistence routines, their social organization, their physical dispersal, and many elements of their culture, far from being the archaic traits of a people left behind, are purposefully crafted both to thwart incorporation into nearby states and to minimize the likelihood that statelike concentrations of power will arise among them. State evasion and state prevention permeate their practices and, often, their ideology as well.’ The long existence of Zomia disproves the hypotheses that we require some form of coercive hierarchy to function as societies and that an elite with coercive authority will always emerge over time.

When the Spanish came to Central America, they made short work of Montezuma and Tenochtitlan, along with Atahualpa and Incan civilisation. Why? Because if you cut off their head of a rigidly hierarchical organisation, which the Spanish did by killing its chief, you incapacitate it. Then they went to the Apaches. The Apaches did not have rulers. Instead, they had spiritual leaders called a Nant’an (eg. Geronimo), who led only by example and not coercion. From the Starfish and the Spider: “You wanted to follow Geronimo? You followed Geronimo. You didn’t want to follow him? Then you didn’t. The power lay with each individual—you were free to do what you wanted. The phrase ‘you should’ doesn’t even exist in the Apache language. Coercion is a foreign concept.” They were free people, most of whom resisted the Conquistadors’ attempts to adopt an agrarian life and convert to Christianity. They fought back and won and held back the Spanish for centuries. The Apaches succeeded so long because of the decentralised way they organised their society.

Apache society was not disorganised. It was in fact very advanced and complex. But it was decentralised—very differently from a hierarchical society. A decentralised society is characterised by flexibility, shared power and ambiguity, which ‘made the Apaches immune to attacks that would have destroyed a centralised society.’

The Spanish would try to kill the leaders but leaders kept emerging. Likewise, you could kill people participating in the Egyptian Revolution but it would not stop the Revolution. In fact, when you attacked the Apaches, they survived and got stronger as a result. They decentralised even more. ‘This is the first major principle of decentralisation: when attacked, a decentralised organisation tends to become even more open and decentralised.’

Ireland was also effectively anarchic until conquered by England. It functioned as a number of confederations (called tuatha) composed of independent political units that came together annually to vote on common policies. People were free to, and did, secede from their confederation and join another. Association was voluntary.

Laws were not changed at the whim of rulers (because Ireland was not ruled) but when people voted in an assembly to change them. Laws were not created by a clique, as in our time; nor was justice dispensed by a monopoly provider. Parties to disputes selected from a number of professional jurists chosen for their wisdom, integrity and knowledge of customary law. Several schools of jurisprudence existed and competed for the business of dispensing justice. Other people, in effect insurance providers, were independent from the jurists and joined with the party that won the case to exact punishment on the loser. If the loser did not pay, the entire community considered him an outlaw and would no longer engage in contracts with him.

Ireland suffered small-scale conflicts, but without a central state that taxes and conscripts, these were negligible compared to the bloodbaths of the rest of Europe. Ireland may not have been the ideal anarchy, but in the absence of Enlightenment ideas of freedom, justice and equality, it did well.”

Rayn: The Iroquois Confederacy is a great example of a SUCCESSFUL STATELESS SOCIETY, and the peace among these peoples lasted over two centuries!

An Anarchist Study of the Iroquois:
http://www.anarkismo.net/article/4907

“Kahentinetha Horn’s description of consensual decision-making among the Kanien’kehá:ka:
‘[N]o one can impose their will nor make decisions for another, all must understand the viewpoint and agree of their own free will. The goal is not total agreement, but total understanding. If there is no agreement, then the consensus is to retain the status quo. If there is understanding by all then they go ahead with the decision… In entering the consensual decision-making process, whatever ideas are put into the process, the needs and attitudes of each is considered and complements the decision. Also, the individual has a duty to be directly involved, and to bring their ideas into the discussion within their clan. The final decision will be fully satisfactory to some, satisfactory to others and relatively satisfactory to the remainder, and will reflect elements from every group. This is a slow careful process requiring the reaching of a full understanding by each individual and not a decision made by a ‘leader.’ The person who explains the decision is a spokesman.’ (102)

The Kaianere’kó:wa lacks the monopoly of force and the authority of coercive control that define statist polities. It is a mutual agreement of non-aggression among its participants, aimed primarily on maintaining peaceful relations among them, rather than a guiding document for the rule of elites over the rest of society. Richter has stated that ‘the coercive exercise of authority was virtually unknown’ among the Rotinonshón:ni,(103) and that their ‘political values were essentially noncompetitive.’ (104)”

Yet, sickeningly enough, America repaid the kindness of the Iroquois League with a propaganda campaign, labeling the indigenous individuals of the North as “savages” to demonically justify a barbaric GENOCIDE!