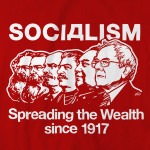 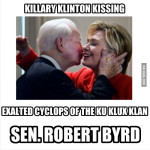 Supporters of Sanders also typically ignore the fact that so-called “Communist States” never even use such a term to describe themselves, and prefer to refer to their political system as a “Socialist State,” and/or a “Workers’ State” (while often identifying by the term “Republic,” too, ironically, and also engaging in “elections”)!

According to the fully-cited Wikipedia article above: “A communist state is a state that is governed by a single party adhering to some variation of Marxism–Leninism as its guiding ideology.[1] The term ‘Communist state’ is used by Western historians, political scientists and media to refer to these countries. However, contrary to Western usage, these states do not describe themselves as ‘communist’ nor do they claim to have achieved communism; they refer to themselves as Socialist states or Workers’ states that are in the process of constructing socialism.[2][3][4][5]”

[2] Wilczynski, J. (2008). The Economics of Socialism after World War Two: 1945-1990. Aldine Transaction. p. 21. ISBN 978-0202362281. “Contrary to Western usage, these countries describe themselves as ‘Socialist’ (not ‘Communist’). The second stage (Marx’s ‘higher phase’), or ‘Communism’ is to be marked by an age of plenty, distribution according to needs (not work), the absence of money and the market mechanism, the disappearance of the last vestiges of capitalism and the ultimate ‘whithering away of the state.”

[3] Steele, David Ramsay (September 1999). From Marx to Mises: Post Capitalist Society and the Challenge of Economic Calculation. Open Court. p. 45. ISBN 978-0875484495. “Among Western journalists the term ‘Communist’ came to refer exclusively to regimes and movements associated with the Communist International and its offspring: regimes which insisted that they were not communist but socialist, and movements which were barely communist in any sense at all.”

[4] Rosser, Mariana V. and J Barkley Jr. (July 23, 2003). Comparative Economics in a Transforming World Economy. MIT Press. p. 14. ISBN 978-0262182348. “Ironically, the ideological father of communism, Karl Marx, claimed that communism entailed the withering away of the state. The dictatorship of the proletariat was to be a strictly temporary phenomenon. Well aware of this, the Soviet Communists never claimed to have achieved communism, always labeling their own system socialist rather than communist and viewing their system as in transition to communism.”

[5] Williams, Raymond (1983). “Socialism”. Keywords: A vocabulary of culture and society, revised edition. Oxford University Press. p. 289. ISBN 0-19-520469-7. “The decisive distinction between socialist and communist, as in one sense these terms are now ordinarily used, came with the renaming, in 1918, of the Russian Social-Democratic Labour Party (Bolsheviks) as the All-Russian Communist Party (Bolsheviks). From that time on, a distinction of socialist from communist, often with supporting definitions such as social democrat or democratic socialist, became widely current, although it is significant that all communist parties, in line with earlier usage, continued to describe themselves as socialist and dedicated to socialism.”