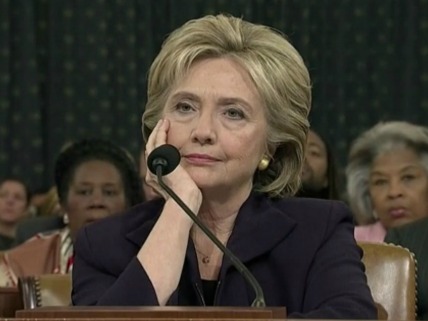 Hillary Clinton, testifying before the House Select Committee on Benghazi

(Jacob Sullum) Hillary Clinton took credit for the U.S. intervention in Libya, but she will never take the blame. As a detailed, damning new account in The New York Times shows, the former secretary of state was indeed instrumental in pushing President Obama to pick sides in Libya’s civil war by bombing longtime dictator Muammar al-Qaddafi’s forces and arming his opponents. But as the Times also shows, her warmongering is nothing to be proud of, although she bragged about it in 2011 and continues to portray its results as a paradigmatic example of “smart power.”

Robert M. Gates, the secretary of defense at the time, describes Obama’s decision to intervene as a “51-49” proposition, adding, “I’ve always thought that Hillary’s support for the broader mission in Libya put the president on the 51 side of the line for a more aggressive approach.”

One Response to Hillary Clinton, the Unrepentant Warmonger