Discussing the Moment When America “Jumped the Shark”

The following correspondence originally took place upon the Facebook wall of an acquaintance, after he shared a Twitter screenshot, located here, and tagged me in his post… 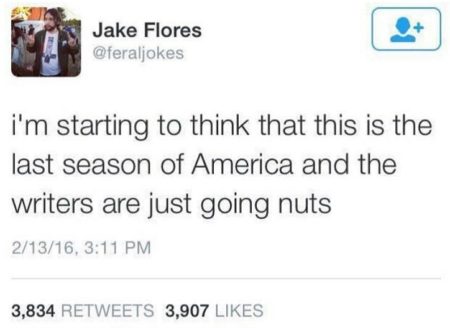 Jason L.: I’d say ratification of the Constitution, but that’s just me.

Nickie A.: Give that man a trophy!

Rayn: Indeed, Jason! Since 2003, I always say: “Ever since the institution of the Constitution, revolution’s been the only solution to fight the mind-pollution.”

“Starr O.: ‘It’s almost like a team of the best, most genius comedy writers in the galaxy wrote the script for election season 2016.’ “

Matthew A.: Bonus points for Starr.

Eric R.: Not sure of the exact day but things make about as much sense as the end of “lost” nowadays…
I think it was pretty much doomed from the inception.

Andy C.: John Adams, Civil War, Woodrow Wilson and WWI, FDR/WW2, Bretton-Woods… all candidates, but I still like “the Constitution” as the best answer.

Jacob Y.: Establishment of Fed seems pretty reasonable since it’s not only the longest lasting central bank in our history but also the source of our exaggerated business cycle that will one day destroy us.

Nathan S.: Or taxing people for not buying certain products…it’s a toss-up.

Jesse G.: Not creating term limits in congress and allowing them to become fat on power and greed while they systematically dismantle what made our country become the power in the world it is.

John S.: I don’t think the Constitution answer can be topped. The only thing to do now is to list the instances where it was eroded, despite knowing that it inevitably had to be.