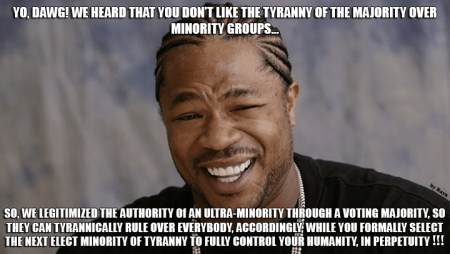 “Yo, Dawg! We heard that you don’t like the tyranny of the majority over minority groups… So, we legitimized the authority of an ultra-minority through a voting majority, so they can tyrannically rule over everybody, accordingly, while you formally select the next elect minority of tyranny to fully control your humanity, in perpetuity!”
(Artwork by Rayn, and originally located here)