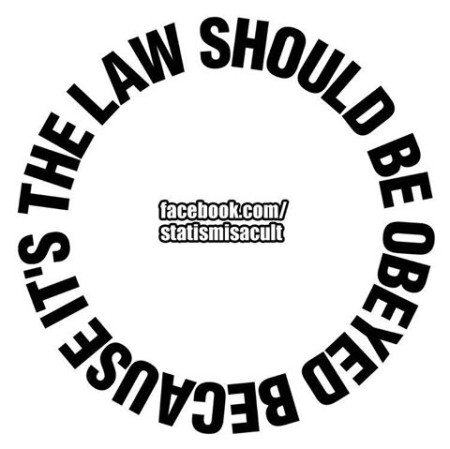 “The law should be obeyed because it’s the law…”

Katherine C.: Well, the law should be obeyed because it’s basically the social contract that allows us to coexist peacefully (enough).

Genaire: The social contract in which no one has signed.

Katherine C.: If we had to rely on every idiot and moron to sign it, it would never get done, nor would it be efficient. I’m not saying the system is perfect, not even close, but the ideal isn’t a bad one.

Rayn:  I don’t agree with you for two reasons, Katherine. For one, legality doesn’t equal morality. Confusing the two is a very dangerous mode of thinking.

“How does something immoral, when done privately, become moral when it is done collectively? Furthermore, does legality establish morality? Slavery was legal; apartheid is legal; Stalinist, Nazi, and Maoist purges were legal. Clearly, the fact of legality does not justify these crimes. Legality, alone, cannot be the talisman of moral people” – Walter E. Williams

Genaire: I know of no contract other than this “social contract” where the parties involved don’t have to give consent. Actually let me correct myself, slave contracts only required the consent of one party member.

Rayn: Secondly, Katherine, a contract MUST be SIGNED for it to be legally enforceable! This is referred to as “CONSENT,” and without it, you are merely condoning COERCION against peaceful people. 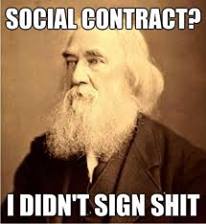 Rayn: I’ve searched high and low for this mystical “social contract” you refer to, Katherine, but it is as non-existent and faith-based as the guiding forces behind just about any other cult religion I’ve ever seen. I do not believe in it, nor do I consent! Statism Is Slavery! Statism is a Religion! Statism Is A Cult!

Rayn: “If we had to rely on every idiot and moron to sign it, it would never get done, nor would it be efficient,” you say, Katherine? That wouldn’t happen to have anything to do with the fact that most of us “stupid” human beings simply WOULDN’T CONSENT to the legalization of criminality, now would it? Hmmm…

And, your solution the the complex issues of society, is to rely upon “idiot(s) and moron(s)” to RULE over ALL of us WITHOUT our CONSENT, because you PERSONALLY believe that it is a MUCH MORE EFFICIENT means of deciding upon and enforcing “law”? Wow… Call me Bartleby, ‘cuz “I would prefer not to”!

If such a system is so ideal FOR YOU, then why not INDIVIDUALLY CONSENT to live under the yoke of your morally-bankrupt “betters,” while leaving innocent and peaceful Individuals, who are not in need of such hierarchical, top-down, control-grid, “structure” in their lives, COMPLETELY ALONE!

Katherine C.:  I did say the system wasn’t perfect and that’s not what I’m saying. I’m saying that in order to for people to coexist peacefully, we need rules. Otherwise there is anarchy.

And presently, we are not slaves. People are free to move somewhere else or to live off the grid. Rayne, apparently you haven’t searched high or low enough! Lol have you never heard of Jean-Jacque Rousseau, John Locke? They came up with the stuff on social contract.

And Rayne, I know you’re smart and I love you (tho I wish I could visit with you more!!), but I don’t have the time you have to research my point and argue as explicitly as you do. It doesn’t mean I’ve given up or that I agree with you, but I just don’t have the time or energy. Most of us don’t. We’re too busy with work, kids, loved ones, etc. I just wanted to say that one comment. That fundamentally, we do need rules to function as a society.

Rayn: You are incorrect, Katherine, for a few reasons. To begin, you are completely hijacking and misusing the word, “Anarchy.” It actually means, “WITHOUT RULERS,” not “WITHOUT RULES”! Perhaps “Chaos” is the word you’re looking for?

Rayn: Secondly, Katherine, you are misusing the word, “slave.” Even the Merriam-Webster dictionary defines slave as, (1): “a person held in servitude as the chattel of another,” or (2) “one that is completely subservient to a dominating influence.” Take note of the fact that NEITHER of these have to do with the narrow definition of slavery you propose, as being merely a restriction of “FREE MOVEMENT,” while both of them very accurately describe the relationship between “citizen” and “government.”

Genaire: If you can be imprisoned for victimless crimes you are indeed a slave.

Rayn:  Katherine, the philosophies of Jean-Jacque Rousseau and John Locke that you speak of are nothing more than THEORETICAL ATTEMPTS to INTELLECTUALLY legitimize a government of NON-CONSENT! Now, if you’re so certain that I haven’t searched thoroughly enough, and that this “Social Contract” you speak of truly exists, please do me the courtesy of showing me a HARD COPY of it!

I can say for certain that you will NEVER BE ABLE TO, because it DOES NOT EXIST!

And, even if you presented something that might REMOTELY SEEM like a SOCIAL CONTRACT, you’ll soon be met with the harrowing realization that “I DIDN’T SIGN SHIT”!

Katherine, allow me to put your misconceptions about “free travel” being the way to determination of whether slavery is taking place to rest. Please watch the following video to understand how Statism Is Slavery:

Rayn: As for your assertion that we need “rulers” live in peace, history itself DEBUNKS this Statist DELUSION!

In “The Rights of Man,” Thomas Paine wrote the following:

“For upwards of two years from the commencement of the American War, and to a longer period in several of the American States, there were no established forms of government. The old governments had been abolished, and the country was too much occupied in defence to employ its attention in establishing new governments; yet during this interval order and harmony were preserved as inviolate as in any country in Europe. There is a natural aptness in man, and more so in society, because it embraces a greater variety of abilities and resource, to accommodate itself to whatever situation it is in. The instant formal government is abolished, society begins to act: a general association takes place, and common interest produces common security.”

Does that sound like it agrees with your regurgitated, revisionist history about that nature of humanity?

You see, it is PRINCIPLES that guide a peaceful and free society, not “RULERS”! The Non-Aggression Principle and Voluntaryism inherent to Individual sovereignty are perfect examples of what is being described here.

Indeed, it was Thomas Paine who wrote, “An army of principles will penetrate where an army of soldiers cannot,” as well! He saw, first-hand, the peaceful nature of society without “rulers” and their many illegitimate, immoral “rules.”

Now, keep in mind that this TRUE American “Founder,” Thomas Paine, wrote “Common Sense” (the inspiration for the “Declaration of Independence”), is considered the “Father of the American Revolution,” argued for the EQUAL rights of WOMEN, and was a SLAVERY ABOLITIONIST! Check into Paine, and you will NEVER AGAIN allow a single immoral individual to tell you that you can’t SH!T ALL OVER the memory and reputation of the other so-called “Founding Fathers” for their disgusting white supremacism, male chauvinism, and slave ownership! NEVER ACCEPT the cowardly, illogical, disingenuous and collectivist argument that you are looking at the despicable deeds of these revolution-hijackers through a “lofty,” “modern day understanding” of what actually ALWAYS HAS BEEN, and ALWAYS WILL BE RIGHT! Any sheep that would say such a thing only seeks to reduce their own cognitive dissonance at the expense of YOUR SOUL – bidding for your silence, just as those of their ilk ALSO did BACK in the days of Paine, TOO!

This last paragraph is a quote from the following article I wrote:

Rayn: Katherine, this would be a good time to point out that society and government are not at all the same, and their differences are distinct and clear. As Thomas Paine famously wrote within “Common Sense,”:

“Some writers have so confounded society with government, as to leave little or no distinction between them; whereas they are not only different, but have different origins. Society is produced by our wants, and government by wickedness; the former promotes our happiness positively by uniting our affections, the latter negatively by restraining our vices. The one encourages intercourse, the other creates distinctions. The first is a patron, the last a punisher.

Society in every state is a blessing, but government even in its best state is but a necessary evil; in its worst state an intolerable one…”

I would highly suggest that you check out this very small, pamphlet-sized writing of Paine’s, as it is the INSPIRATION for America’s “Declaration of Independence,” and well, well, well worth the read!

Here’s what I wrote in my article:

“Many Americans are unconcerned with the fact that our so-called “Founding Fathers” were a small group of rich, white, male, land-holding slave-owners who legitimized imperialism, and the virtual genocide of millions of indigenous North American tribal individuals, while also denying the equal rights of women. Few could imagine that these men ultimately conspired to horde their so-called ‘enlightenment’ for themselves, crafting an intellectual dictatorship over the rest of the populace. Even with the facts laid bare, almost noone could believe that exalted men like Jefferson and Hamilton sought to secure for themselves an elevated position over the masses as the elitist ruling class. Yet, history shows that, once again, the hive-minded hierarchy was formed, with the express purpose of protecting the few parasites on top at the expense of the whole…

Meanwhile, America’s true ‘Founding Fathers,’ North America’s own Iroquois League, and Britain’s Thomas Paine, have been almost completely ignored by history’s revisionists! Yet, without acknowledging their very important contributions to the Constitutional Republic of the United States, the citizens of America will forever remain ignorant of how our government really took root: through rebellion against injustice, along with the legal aid of a helpful, peaceful nation! Understanding this information is one of the key ingredients that will help our country finally learn to lead the world by example, not by force!

Thomas Paine, the ‘Father of the American Revolution,’ not only authored ‘Common Sense,’ the document that inspired the later ‘Declaration of Independence,’ but also truly represented the full spirit of wisdom with his words and deeds, being a staunch slave abolitionist, while also arguing for the equal rights of the sexes!

Yet, sickeningly enough, America repaid the kindness of the Iroquois League with a propaganda campaign, labeling the indigenous individuals of the North as “savages” to demonically justify a barbaric GENOCIDE! This is REVISIONISM, FOLKS! Can you see it? The snake eats its own tail in order to remove the evidence of its past, and feign present perfection! It is the ‘circle of evil,’ and the TRUE WISDOM BEHIND THE OUROBOROS! If only we would WAKE UP to the CLEVERNESS of our ENEMY, TRUTH and JUSTICE would FREE US from “THE BODY OF THIS DEATH!” We must ALL increase our CRITICAL THINKING SKILLS and our SYMBOL-LITERACY – as well as EACH OTHER’S! This is the only REAL KEY to UNLOCKING the SHACKLES OF IGNORANCE!)

Check your history! Just like most revolutions of the past and present, the American Revolution was CO-OPTED by a bunch of ultra-rich, ultra-greedy PIRATES in sheep’s clothing, looking to rule over an unrepresented majority using their age-old, long-worshiped BABYLONIAN, INSECTOID HIERARCHY- the HOUSE OF BONDAGE!”

One Response to Circular Reasoning: Debate a Statist Edition