The following debate originally took place upon my Facebook wall, after I posted artwork being shared by the page, “Free Talk Live“… 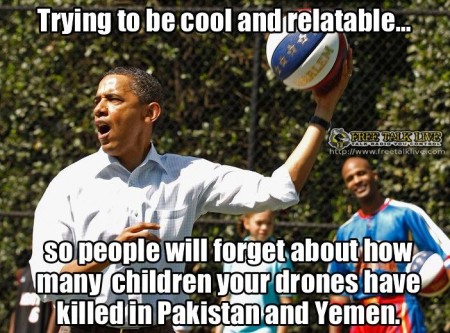 “Trying to be cool and relatable… so people will forget about how many children your drones have killed in Pakistan and Yemen.”

Rayn: The man appears cool and relatable only to those who accept him murdering innocent children. Labeling the man’s war crimes as “warfare” and calling innocent children as “enemies” perfectly illustrates George Orwell‘s point that “political language… is designed to make lies sound truthful and murder respectable.”

Obama certainly isn’t Hitler… but, Hitler is not my litmus test for whether or not evil is taking place.

Abdulrahman al-Awlaki, was a US citizen and an innocent child. Specifically, he was born in Denver, Colorado, and lived in American until he was 7 years old. He was murdered by a US drone strike while peacefully eating dinner at a restaurant in Yemen with his teenage cousin, who was also killed in the attack, along with at least five other civilians…

al-Awlaki was not even with his father the day he was murdered because he was still in the process of searching for him and he had not seen him in years. Sadly for him, it was during this very quest that he soon unwittingly entered a lawless, war *criminal* zone, where the CIA had been regularly terrorizing civilians for years in the name of “fighting terror.”

Genaire: Question: Can the same be said about Truman’s nuclear bombing of two civilians cities in Japan? Did the punishment fit the crime? Considering the fact they bombed military targets our retaliation of bombing civilian cities in my rational opinion doesn’t fit the crime.

We are fighting “terror”. Terror is not organized into strategically placed military facilities. These “terror” groups reside amongst innocent people special considerations must be made to stop the killing of these innocent people. Even greater effort must be made when considering we armed, trained and radicalized most of them through our imperialist foreign policies.

I equate it to Canada trying to kill the K.K.K. which is also a terrorist group. How can they kill a K.K.K. chapter without killing the innocent people surrounding these chapters? Does the killing of our innocent civilians justify the bombing of this terrorist group? When their are no clear cut lines of battle as is the case when fighting “terror” the whole world becomes an open target.