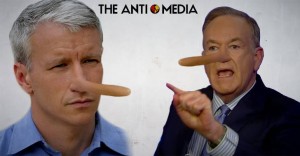 (Carey Wedler, TheAntiMedia) A Gallup poll released on Wednesday indicated that Americans are increasingly distrustful of mainstream news, classified as newspaper, radio, and television. Of those polled, only 40% indicated they had a “great deal” or  “a fair amount” of trust in the mass media to report the news “fully, accurately, and fairly.” The other response options were “not very much” and “not at all.”