Behold! “Science” as a Religion!

As I scrolled through my Facebook news feed, I discovered the following information here, being shared by my friend, Goff J-Crush P, and originally posted it to my own wall… 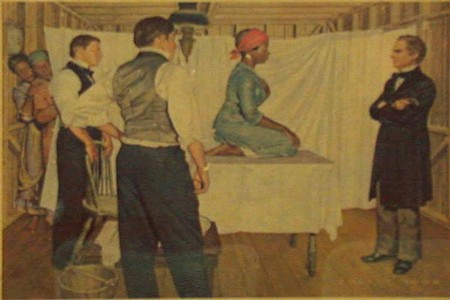 #BlackHerstory: In the 19th century, the father of modern gynecology, J. Marion Sims, conducted his research experiments on enslaved Black women. Sims performed the invasive and torturous procedures without anesthesia. J. Marion Sims’ justification for choosing not to anesthetize his test subjects was that he did not believe Black women felt pain at all. In an 1857 lecture, he stated that it was “not painful enough to justify the trouble.”

My Commentary: Behold! “Science” as a religion!

Individuals must finally recognize the fact that no school of thought or ideology is immune to corruption! The destruction that overzealous control-freaks and power-hungry tyrants can wreak on a sleep-walking humanity “is as boundless as the dark” they operate in when they commit their crimes against nature!

Human sacrifice in the pursuit of knowledge has taken place so many more times in the field of medicine than most “science-lovers” would ever dare admit to… that is, if they’ve even bothered looking into the topic! They simply cannot admit that science is merely *knowledge,* alone – not wisdom, not understanding, and most DEFINITELY not morality! And, this represents just ONE of the many reasons that science is NOT EVEN CLOSE to being a single line of forward-moving progress towards “truth,” as many of those Individuals raised up on State education have been led to believe. Science is much better understood as a living tree of DATA, networked in a jumbled, overlapping, bush of branches – with many thriving in the light, while some mold in the ground, wither in the shade, and rot from pestilence. Such a system is in need of constant trimming using the “scientific method,” and shall forever remain rife with conflicting theories and viewpoints that will often take more than a century for humanity to resolve, if never!

Among some of the other reasons that science cannot accurately be viewed as a straight-line path to “truth”:

– Nothing in science is absolute, only more and more highly probable

– Science can involve very complex topics, fields, ideas, equations, etc., beyond the grasp of the “layman,” making it especially susceptible to fallacious “appeals to authority” – especially from those unable to fully appreciate the scientific method.

Here’s a helpful list with some examples of scientific criminality…

10 of the Most Evil Medical Experiments in History:
http://www.salon.com/2014/09/04/10_of_the_most_evil_medical_experiments_in_history_partner/

And, here’s a recent example of a genocidal eugenicist vampire “coming out of his coffin” to froth at the mouth for the murder of innocents…

Even a “forward-thinking,” “ahead of his time”, “brilliant” and “genius” man like Nikola Tesla wasn’t immune to pseudoscientific vulnerability. In the end, he was still human, and so, capable of making grave errors in logic, even with as much understanding as he proved to have about certain aspects of science…

Of course, such denials about the reality of science’s limitations only ensures that criminality like the above-mentioned examples will continue on, with little resistance…

Each of us must personally remain vigilant in the quest for truth, wisdom, understanding, freedom, peace and justice, refusing to lazily fall back on mindless ritual and tradition, nor blindly adjusting our focus to match that of the “expert”-stamped status quo, rather than directly observing phenomena for ourselves, as much as possible, and challenging ourselves to be especially inquisitive when we cannot, engaging in much OPEN, NON-POLITICAL DIALOGUE AND DEBATE, as a way of injecting a healthy dose of skepticism into the equation.

Rest assured that many of today’s wrongs will not be recognized for what they really are until long after the damage is complete… just as history has proven, time and time again! All too often, criminal operations are carried out by “authorities” with barely a single critical consideration by their weak-willed followers, who eagerly aid and abet their sociopathic “betters,” in pure awe of the confidence these lizardly “leaders” exude. These herd-minded human batteries are not only unwilling to “upset” the confident sociopaths they adore, for fear of losing favor, they also secretly view their own uncertainty about exactly how to “best impose management upon society” as a weakness, rather than a strength! If they were to finally see through the illusion-based deception of “rulership” as a “necessity,” rather than a form of planned obsolescence, they would easily determine that usurping the free-will of others should be a source of uncertainty – and, also, DISGUST! And, until this dynamic is adequately explored, the need for sheeple to grovel before sociopathic charmers will continue on until “confident” revolutionaries emerge to make these types feel “safe” enough to rebel!

Wanna see if you’re paying attention? Well, can you name any so-called “scientific experiments” currently being forced upon America’s population without our consent?

(hint: genetic food “experiments” that have no “control” are not even remotely “scientific,” and medical “procedures” that cause debilitating neurological disorders like Guillan-Barres Syndrome and Narcolepsy in those with specific sorts of compromised central nervous systems, and cause disease in those with compromised immune systems, are publicly-acceptable SOFT EUGENICS, wherein the “weak” are legally sacrificed for the survival of the “strong.”

One Response to Behold! “Science” as a Religion!