Wars of Aggression Are ALWAYS Illegal, No Matter How Many Efforts Are Taken to Justify Them! 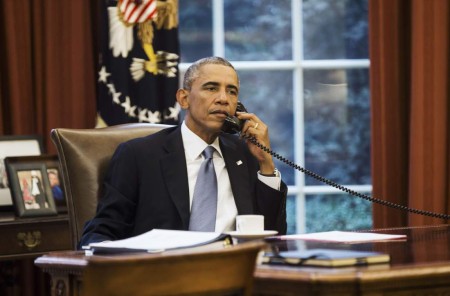 Obama’s Anti-ISIS War in Syria May Be Illegal:
http://time.com/3328080/isis-syria-aumf-obama-law/

(Massimo Calabresi, Time) Obama is relying on questionable legal authority in his pursuit of terrorists, but that never stopped George W. Bush.

If truth is the first casualty of war, law is apparently the last, at least for President Barack Obama.

Obama came to office declaring his determination to reimpose legal limits on the American effort to defeat al Qaeda. He swore to close Guantanamo Bay, abolish torture, tighten rules for the treatment of terrorist prisoners and rein in the broad executive power President George W. Bush had claimed in the global hunt for terrorists.

But after five-and-a-half years of near-constant terrorist brush fires in Africa, the Middle East and South Asia, and a Congress that remains largely unwilling to update key counterterrorism legislation, Obama appears finally to have surrendered to a very loose legal definition of where and when he can use military force against terrorists.

My Commentary: “May be illegal?” Since when are wars of aggression EVER NOT OUTRIGHT CRIMINAL!!?

Bush 2.0 continues on with the same lying, thieving, civilian-murdering agenda of the robber-class that helped put him in office, in the first place. And, without a single hitch, the willfully ignorant majority continues to support him! “ISIS” is just another American-invented straw boogie man, much like the Mujahideen, the M.A.K., Al Qaeda, the Taliban, the LIFG, and many others!