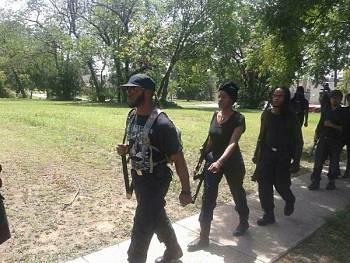 (Elizabeth Nolan Brown, Reason) In Texas, blacks are protesting police violence in a particularly Southwestern way: By invoking their right to open carry. On Wednesday, more than 30 membersof the newly-formed Huey P. Newton Gun Club gathered to march through South Dallas with rifles, shotguns, and AR-15s. The group eventually entered a restaurant with their weapons while Dallas police officers were inside eating lunch.

“The recent murders of unarmed black, brown, and whites across the United States of America has eradicated trust in the police,” the gun club’s website states.

My Commentary: Ha! I hope this makes some liberal heads explode! Too bad this club is located in Dallas!

I can hear the leftists, already… “But, it’s more ‘moral’ to be executed by police then to defend yourself against them! They’re just doing their job! What if we all fought back against executions? What would happen, then? Do you LIKE chaos?”