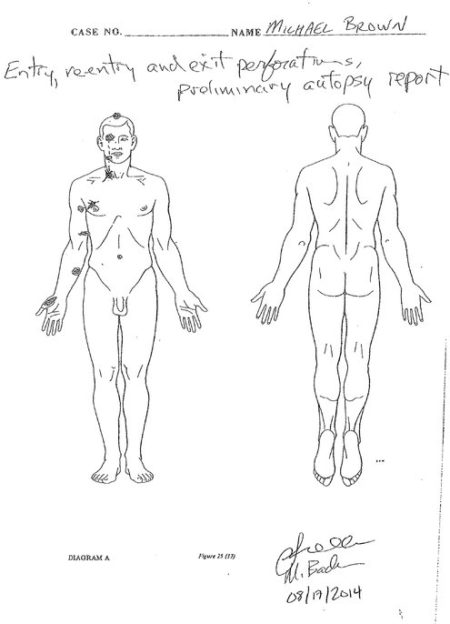 (Frances Robles & Julie Bosman) Michael Brown, the unarmed black teenager who was killed by a police officer, sparking protests around the nation, was shot at least six times, including twice in the head, a preliminary private autopsy performed on Sunday found.

One of the bullets entered the top of Mr. Brown’s skull, suggesting his head was bent forward when it struck him and caused a fatal injury, according to Dr. Michael M. Baden, the former chief medical examiner for the City of New York, who flew to Missouri on Sunday at the family’s request to conduct the separate autopsy. It was likely the last of bullets to hit him, he said.

My Commentary: Michael Brown was shot by officer Darren Wilson at least six times, in total – as an unarmed civilian facing his executor with hands up, in surrender. Two of the bullets that Wilson fired at Brown entered his head, including one bullet that “shattered [his] right eye, traveled through his face, exited his jaw and re-entered his collarbone,” leaving “at least five different wounds” in its path.