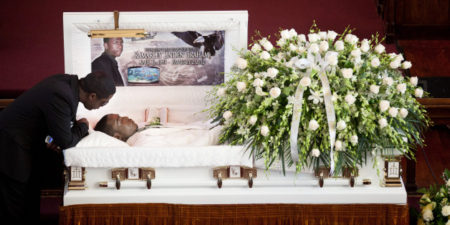 Franclot Graham speaks to his son, Ramarley Graham, in his casket before funeral services

Rayn: Ramarley Graham Was Killed By The NYPD Over Two Years Ago, And Nothing Has Happened:
http://www.huffingtonpost.com/2014/08/08/ramarley-graham-nypd_n_5662134.html

Juan S.: ZECHARIAH 11:5… Whose possessors slay them, and hold themselves not guilty:

Rayn: Indeed! “[They] are of [their] father the devil, and the lusts of [their] father [they] will do. He was a murderer from the beginning, and abode not in the truth, because there is no truth in him. When he speaks a lie, he speaks of his own: for he is a liar, and the father of it.” – Yahuchanan (“Yah is Gracious”) 8:44

Those who reject the Sacred Spirit of Creation to follow after the Wicked Ways of Cain will, indeed, find themselves among their brethren… in the Pit!