The following debate originally took place upon the Facebook wall of family, after they shared a photo from here… 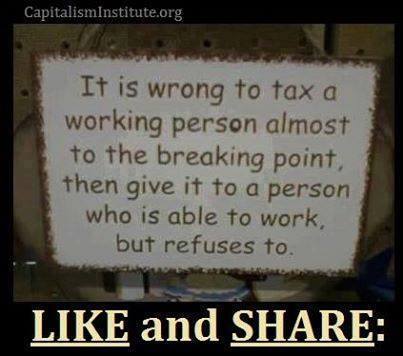 “It is wrong to tax a working person almost to the breaking point, then give it to a person who is able to work, but refuses to.”

Rayn: Word! The parasitic, tax-thieving, morally-bankrupt State, run by slimy banksters, politicians and corporations, and protected by an army of police and military minions, has spent far too long violently plundering its way through existence, while *forcing* the rest of us to endlessly struggle for survival under its brutal, murderous, imperialistic, hierarchical, tyrannically-bureaucratic, top-down controlled Pathocracy! It’s time that we acknowledge the extortion racket we are being subjected to as PURELY CRIMINAL, and finally stop negotiating with this financial and political terrorist!

Brooke N.: These days the people who are getting the most breaks and benefits by a long shot are the rich and the people being taxed are the poor.

Genaire: I’m sick of it on all levels Brooke. Taxes being so high that the small businesses suffer, large corporations legal loop holes and tax shelters escape taxes and the people that do nothing to better their position relying on the state welfare system to provide.

Brooke N.: There’s not much left to rely on for those on the bottom except working under the table or doing something against the law. If the rich do it they just buy a change in the law so it’ll be legal. I’m a lot more worried about fascism than I am about socialism–and I do believe government is necessary, we’ve just lost our control of it and our say in it–

Genaire: I don’t think that is true Brooke. The military is always hiring and the trucking industry. I don’t think a truly motivated person has the right to say no one is hiring. Work the dead end job but seek additional training to better yourself.

Brooke N.: Sometimes that’s possible–if you’re healthy and smart (young helps too). Sometimes there are health, childcare and other considerations that don’t really make it possible. My son is disabled, his wife has two domestic jobs, if they didn’t have food stamps they wouldn’t make it–I’m raising one of their kids. It’s never quite that ideal, everybody can work thing–some can’t.

Genaire: Even in the meme it refers to people that are able to work. I would never think to force people who are sick, elderly or even single parents to work. Programs should be in place to provide for those people. Lol I’m not a heartless monster.

These suggestions would streamline society to a degree that only about one hour in 100 would be required to make everything anyone requires. I do not advocate this, It is merely a though exercise to notice how most work has been invented. Most work requirements are performances and make work projects expanded by faulty products and people.

The main problem with idle people is that they undermine the mentality of actual producers and hordes of make work drones pretending to be worth supplying goods and services to.

In actuality, most work is actually far more of a burden to society than that same person would be if merely given requirements and left idle. This is why prisons are popular. Most jobs don’t cover the cost of producing the job.