The following correspondence originally took place upon the Facebook wall of my friend, Jonas A., after he shared artwork from here…

Jonas A.: Both are equal and opposite of the same BS we all are dealing with….time to boot them all out! 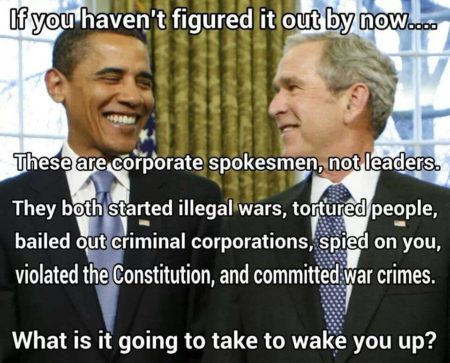 “If you haven’t figured it out by now…
These are corporate spokesmen, not leaders.
They both started illegal wars, tortured people,
bailed out criminal corporations, spied on you,
violated the Constitution, and committed war crimes.

What is it going to take to wake you up?”

Jonas A.: One started…the other just continued the program….

Lynne C.: Correct me if I’m wrong….but Obama is bringing the military home. I’m Canadian and its on our news up here….WorldTruth seems to be blowing wind as far as I’m concerned.

Rayn: To answer your question, Lynne. Obama has authorized the US military to engage in illegal warfare against the nations of Yemen, Libya, Somalia and Syria, on top of continuing with Bush’s wars in Afghanistan, Iraq and Pakistan. I hope this information alleviates your confusion.

Lynne C.: A person doesn’t know who or what to believe any more….that I am sure of.

Rayn: Only believe the facts. 😉

James S.: Coke or Pepsi, both bear different names and slightly nuanced tastes yet they are selling the same sugary concoction that causes diabetes, tooth decay, IBS, and obesity. Make no mistake, with either Bush or Obama it’s the same neocon agenda and fattening up of Wall Street coffers.

Max S.: Every time you see Bush, you see Clinton…does make you wonder. Neither one ever speaks to H. Ross Perot, though. Do we really just have a “democratic republican” party, as historical records suggest? Not endorsing Perot, necessarily, per se…just interesting. Bush, jr., and Gore never speak to Nader, either. Call it snobbery, but what’s its basis, what does it reveal?

Max S.: I have stats showing the Libertarian and Green/Consumer parties…practically DISAPPEARED in the 1984 Presidential election, after a steady pattern of increasing numbers…and a return to that pattern in 1988. I can find no easy, conventional explanation for these phenomena than the most likely one: that the two big parties have nothing but CONTEMPT for third parties, and stomp on them on a regular basis.

Max S.: There is absolutely nothing in the Constitution of the United States about the need for–or desirability of– political parties. The Electoral College does, admittedly, exist in the Constitution, yet the whole “spirit” if not the LETTER of the Constitution is geared toward the INDEPENDENCE of each Elector to vote as their conscience compells, and there is NO reference to a commitment to a Party of ANY kind. Yet, state after state has passed laws committing Electors to “vote for the Party winning the majority” in their states. Done in the name of democratizing the Electoral College, I would argue the overall effect of such state laws is, itself, in violation of the Spirit, if not the Letter, of the Constitution, too.

Max S.: States should be passing legislation committing their Electors to ASSERT COMPLETE INDEPENDENCE FROM ANY POLITICAL PARTY in their Votes. And they should be held accountable if they DON’T assert such independence. That would return us, very quickly, to a Constitutional system of government in this whole area.

Max S.: If such laws were challenged before the US Supreme Court, it would PLAY HELL striking them down! WOULDN’T HAPPEN

Max S.: This would produce non partisan Presidents. I know, I know, there are still numerous other posts the Parties would control…but the White House wouldn’t be one of them, and it would march to its own drum.

Max S.: “Well, this is awkward” would say the MSM, “but neither of the major parties has received a SINGLE Electoral vote”.