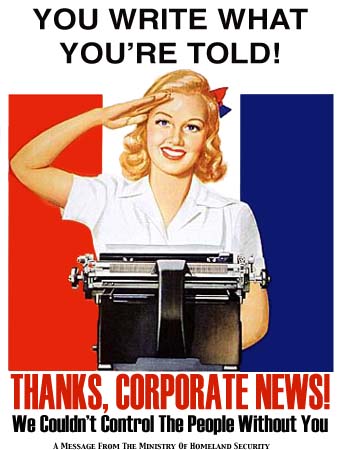 “You write what you’re told!
Thanks, corporate news!
We couldn’t control the people without you!
A message from the Ministry of Homeland Security”
(Artwork by Micah Ian Wright. For more, go to:
http://propagandaremix.com/gallery)

The New York Times pushed fabricated evidence in the run up to the Iraq war.   A year later, the newspaper apologized for its inaccurate, one-sided coverage.

My Commentary: New York Times rag continuously publishes disinformation in order to assist rogue Federal government of US in committing Crimes Against Peace to citizens of Iraq, Syria and Ukraine… Meanwhile, the sleepwalking American majority continues to swallow up the war-narrative being fed to them, then thoughtlessly parrot the mainstream media monopoly’s call for more Wars of Aggression, more murder of innocent foreigners, and more and more funding for sweetheart-deal-taking, corporate-welfare-whoring weapons and death manufacturer scum.