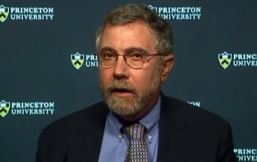 Picture of irony: a smug, humorless Paul Krugman fails to grasp the subtle nuances of satire, even while being well-versed in sarcasm

Economist and columnist Paul Krugman declared personal bankruptcy today following a failed attempt to spend his way out of debt.

In a Chapter 13 filing to the United States Bankruptcy Court in the Southern District of New York, lawyers for Krugman listed $7,346,000 in debts versus $33,000 in assets.

Rayn: Wait… I’m confused, now. I thought this article was supposed to be a parody, not a real news story!

I mean, just look at these two paragraphs:

“The filing says that Krugman got into credit card trouble in 2004 after racking up $84,000 in a single month on his American Express black card in pursuit of rare Portuguese wines and 19th century English cloth

Rather than tighten his belt and pay the sums back, the pseudo-Keynesian economist decided to ‘stimulate’ his way to a personal recovery by investing in expenses he hoped would one day boost his income.”

I laughed my ass off while reading it!

According to the “about” section:

“The Daily Currant is an English language online satirical newspaper that covers global politics, business, technology, entertainment, science, health and media. It is accessible from over 190 countries worldwide – now including South Sudan.

Our mission is to ridicule the timid ignorance which obstructs our progress, and promote intelligence – which presses forward.”