Dreaming of a Better Tomorrow…

The following correspondence originally took place upon my Facebook wall, after I posted artwork being shared by the page, “I Owe You Only Non-Aggression“… 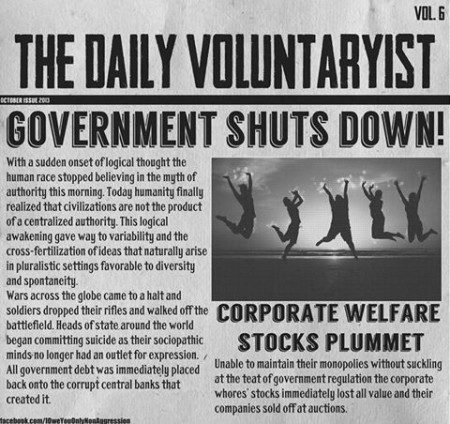 “The Daily Voluntaryist, Vol. 6 – Government Shuts Down!
With the sudden onset of logical thought, the human race stopped believing in the myth of authority this morning. Today, humanity finally realized that civilizations are not the product of a centralized authority. This logical awakening gave way to variability and the cross-fertilization of ideas that naturally arise in pluralistic settings favorable to diversity and spontaneity.
Wars across the globe came to a halt and soldiers dropped their rifles and walked off the battlefield. Heads of state around the world began committing suicide as their sociopathic minds no longer had an outlet for expression. All government debt was immediately placed back onto the corrupt central banks that created it. Unable to maintain their monopolies without suckling at the teat of government regulation, the corporate whores’ stocks immediately lost all value and their companies sold off at auctions. (Corporate Welfare Stocks Plummet)”

Daniel Sv.: If anarchy does descend, I hope you have a nice farm in North Carolina that I can take refuge in and work on.

Daniel Sv.: Make sure though it’s near a university town, has a huge library or Barnes and Noble, and has no cotton. I will pick tobacco, but no cotton!

Rayn: If anarchy ensues, I’ll be growing hemp, my friend! 🙂