The following correspondence originally took place upon the Facebook wall of an acquaintance, after he posted artwork being shared by the page, “Truth Beckons“… 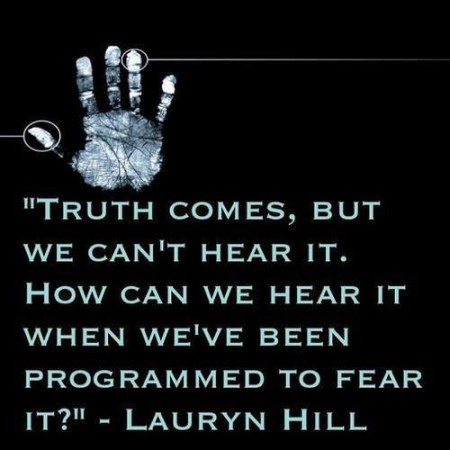 “Truth comes, but we can’t hear it. How can we hear it when we’ve been programmed to fear it?” – Lauryn Hill

Rayn: “Truth comes – we can’t hear it, when you’ve been programmed to fear it.”

It just happens to be one of my favorite songs of ALL-TIME!

Full verse: “There’s a war in the mind – over territory – for the dominion. Who will dominate the opinion? Skisms and isms. Keeping us in forms of religion. Conforming our vision to the world churches decision. Trapped in a section. Submitted to committee election. Moral infection. Epidemic lies and deception. Insurrection – of the highest possible order. Distorting our tape recorders from hearing, like under water. Beyond the borders. Fond of sin and disorder. Bound by the strategy of systematic depravity. Heavy as gravity. Head-first in a cavity – without a bottom. A fate worse than Sodom. What’s got ’em drunk off the Spirits? Truth comes – we can’t hear it, when you’ve been programmed to fear it. I had a vision. I was falling in indecision. Appalling, calling religion – some program on television. How can dominant wisdom be recognized in a system of Anti-Christs and majority rules? Intelligent fools. PhD’s in illusion. Masters of mass confusion. Bachelors of past illusions. Now, who you choosing? The head or the tail? The bloodshed of nail, or confidence in the veil? Conferences at Yale, discussing doctrines of Ba’al. Causing people to fail. Keeping a third in jail. His words nail everything to the tree. Severing all of me from all that I used to be. Formless and void. Totally paranoid. Enjoy darkness as” Lord” – keeping me from the sword. Blocked from mercy. Bitterness serves thee. Hungry and thirsty for good meat we would eat, and still – dining at the table of deceit. How incomplete. From confrontation to retreat – we prolong the true enemy’s defeat. Destitute of necessity. Causing desperation to get the best of me. Punishment ’til there was nothing left of me. Realizing the unescapable death of me. No options in the ‘Valley of Decision.’ The only doctrine: Supernatural Circumcision. Inwardly, only water can purge the heart from words – the fiery darts, thrown by the workers of the arts. Iniquity, shaping in. There’re no escaping when – you’re whole philosophy is paper thin. In vanity, the wide road is insanity. Could it be all of humanity? Picture that. Scripture that. The origin of a man’s heart is black. How can we show up for an invisible war? Preoccupied with a shadow – making love with a whore. Aching in sores. Babylon, the great mystery. Mother of human history. System of social sorcery. Our present condition needs serious recognition. Where there’s no repentance, there can be no remission. And, that sentence – more serious than Vietnam, the atom bomb, and Saddam, and Minister Farrakhan. What’s going on? What’s the priority to you? By what authority do we do? The majority hasn’t a clue. We’ve majored in curses. Search the chapters, check the verses. Recapture the land. Remove the mark from off of our hands. So we can stand – in agreement with his command. Everything else is damned: let them what is understand. Everything else is damned: let them with ears understand!”