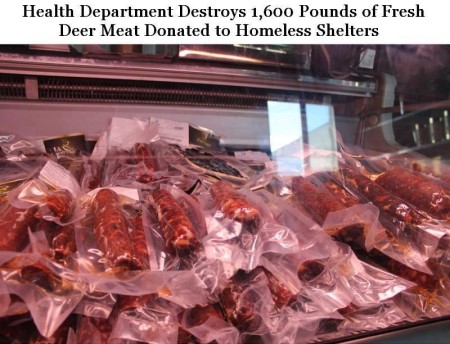 My condolences to “Hunters for the Homeless,” who donated 1,600 pounds of freshly-packaged deer meat, with the intent that it would go to those in need. And, shame of the state of Louisiana for seizing and destroying their amazing contributions, instead of at least returning what had been offered – an act that displayed a complete lack of common sense.

Be sure to read the following article, as well, to understand that homeless individuals are seen as nothing more than unwanted animals by many major cities in the US:

Feeding the Homeless Banned in Major Cities All Over America:
http://theeconomiccollapseblog.com/archives/feeding-the-homeless-banned-in-major-cities-all-over-america

Now, read about this:

Illegal to be Homeless:
http://www.nationalhomeless.org/publications/crimreport/problem.html

While you’re at it, look up the “vagrancy” laws on the books in your local community to understand exactly how the State views homelessness!

I have many more articles I could share on this topic, for those interested, but as you can see, even within those which I’ve provided above: coercion begets coercion, and apathy begets apathy. Cause and effect cannot be magically suspended, as if the laws of nature really only represent a “belief” system!