Hiroshima and Nagasaki Attacks Were Acts of American Terrorism

The following correspondence originally took place upon my Facebook wall, after I posted artwork being shared by the page, “The Non-Aggression Principle“… 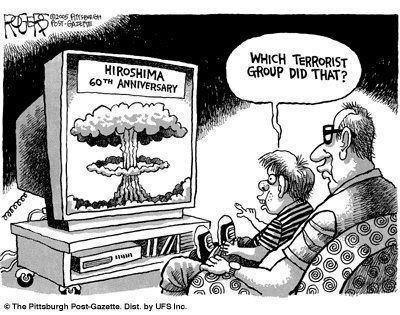 (Hiroshima 60th Anniversary) “Which terrorist group did that?”

Adam G.: The politics around this are super disturbing: no less than 200,000 Japanese dead from an act of intimidation against the USSR.

Rayn: SUPER, indeed! And, yet, many Americans happily justify this act of terrorism, and the mass-murder of civilians that it caused, as a “necessary” step towards ending WWII. Yet, to demolish that lie: would such an excuse be valid for the Iraq government to use, even after enduring an unprovoked attack by the American military, based on a pure lie? NO, of course not!

“Necessity is the argument of tyrants. It is the creed of slaves.” – William Pitt the Younger