Should “Good Ideas” Be Mandatory, or Is Such Coercion Just Another Form of Slavery?

Rayn: Apparently, the authoritarians among us will continue to arrogantly force their “great ideas” upon us, because REASON and CONSENT are not as important to them as BLIND FAITH and COMPLIANCE!

It’s time for Individuals to wake up, and reject ALL FORMS OF COERCION as illegitimate! 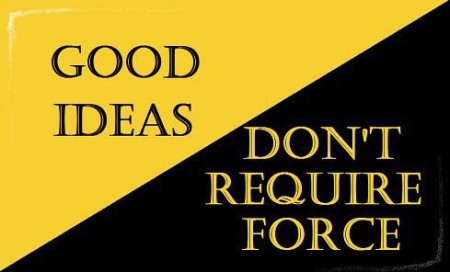 Brian K.: That assumes most people would be smart enough to recognize the good ideas.“We must view with profound respect the infinite capacity of the human mind to resist the introduction of useful knowledge.”Thomas R. Lounsbury

Genaire: Brian how would we measure ones intelligence… an iq test? I know several people that would do extremely well on an iq test yet would be unable to survive without the aide of others. I also know several people in school that consider themselves to be very intelligent yet have not tested this intelligence outside the sheltered environment of a classroom. Then one has to ask himself what overlord would one place in charge of determining this said intelligence the government? I know of governments that deemed unintelligent people worthy of extermination. In a free society however one does not have to worry themself about those arrogant few who deem themselves intelligent enough to decide what a good or bad idea may or may not be.

Brian K.: It’s more a problem of being able to determine which ideas are good; for whom? under what conditions? Everybody has their own ideas/perceptions of what is good and there is little agreement. I doubt there is an objective good.

Genaire: Sounds like we agree then that in a free society one gets to choose what’s good for them regardless of intellectual class.

Brian K.: In that case it would not be possible to have an all-inclusive society. At most you’d just have smaller clusters of like-minded people.

Genaire: You’re making an argument for expanded state governmental powers or at the least a reduction of the federal government.

Rayn: Just to be clear, the words, “good ideas don’t require force,” represent a statement on Voluntaryism, which is a philosophy based in The Non-Aggression Principle inherent to Individual sovereignty. The yellow-black coloring and pattern behind the phrase you see in the graphic isn’t just art; it’s a form of Volutaryist flag (which is also shared with Anarcho-Capitalists).To initiate aggression against another human being, in the form of coercion – no matter what the excuse – good idea, or otherwise – is illegitimate, because it falsely assumes the Individual to be your property, violating his or her universal, natural-borne right to Self-ownership.