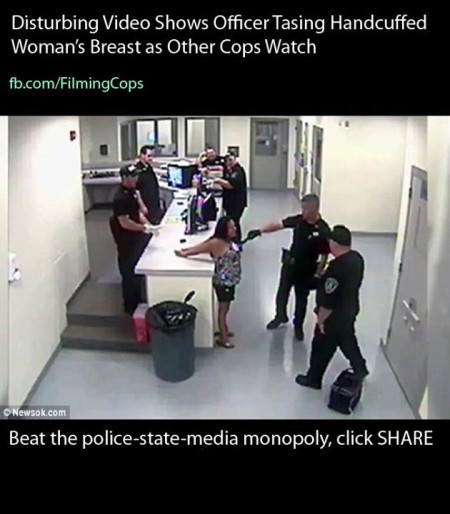 Tony K.: 1) Rodney King sped through the streets of a city WAY over the speed limit high on some unimaginably dangerous drug; as such, he risked the life and limbs of many pedestrians; (2) He was continually told to stay down by the police. He ignored them and continually attempted to get up. He was beaten so that he could be arrested, and put in handcuffs; (3) the officers were found not guilty at their initial trial. The officials were only charged with federal charges for political reasons. (4) The money he was awarded was a total miscarriage of justice in my opinion. The injustice was charging the police in the first place AND the fact that some of them had to go to prison. (5) Rodney King continued to wreak mayhem during the remainder of his life.

Rayn: You are wholly missing the point. To justify the behavior of the officers who beat Rodney King only ENSURES the likelihood that YOU will be beaten by officers in your time of need! YOU CAN BANK ON THAT! It matters not what a citizen is accused of; it is LEGALLY not the job of police to exact punishment on suspects for any of their alleged crimes! Cops are supposed to charge suspects on the books, and let the courts punish them! Do they have no faith in the justice system they are SWORN BY OATH to serve? Apparently NOT, for those that choose to brutalize! These types are UNFIT for duty as PEACE OFFICERS, as they violently escalate situations that are obviously able to be defused through more peaceful means!It is also NOT the job of police to torture citizens for simply failing to follow their orders! For this act, a suspect can only be ARRESTED, and charged, WHILE STILL PRESUMED INNOCENT during apprehension! And, because of this, contrary to popular opinion, cops aren’t even supposed to automatically beat a suspect for resisting arrest, or being combative, either! For this, a suspect is likely to be manhandled, subdued, cuffed in back, and charged with “resisting arrest” and possibly “assaulting an officer,” but should NEVER to struck, unless in the act of landing serious blows against police, or furnishing a dangerous weapon – both of which can place officers in mortal danger. At those times, police can strike to subdue the suspect, but no more than that! Otherwise, it’s excessive force! I would add “cruel and unusual punishment” to that list, as well! Death row inmates can’t be beaten for their crimes, so why would a “suspect” be treated to such brutality? And, once a suspect is in HANDCUFFS, there is almost ZERO CAUSE to strike or taze them, and it is VERY DANGEROUS and unnecessary to do so, as the possibility of falling down, and sustaining head injury becoming VERY REAL, with the suspect no longer able to buffer a drop while their hands are bound behind them. NO BACKGROUND INFORMATION IS REQUIRED to draw this conclusion! The only question is: IS THE SUSPECT IN POSSESSION OF A WEAPON AT THAT MOMENT, or NOT? If not, there is NO QUESTION that striking and tazing are UNNECESSARY reactions! THE SUSPECT’S CRIMES, LEVEL OF INTOXICATION, and COMBATIVENESS BEFOREHAND are ABSOLUTELY IRRELEVANT!If cops aren’t up for the very dangerous, very high-stress, patience-requiring task of their job, and can’t keep a cool head in the heat of the moment, remembering that CITIZENS ARE INNOCENT UNTIL PROVEN GUILTY, then they should QUIT THE FORCE, since they apparently don’t have the fortitude required for service, and CAN’T CUT IT as PEACE OFFICERS! And, the REASON that police must follow ALL protocols, by the books, during suspect apprehension is CLEAR! When ignored, the results are disastrous, as police end up REPEATEDLY brutalizing “DUI suspects” and “drug-intoxicated suspects” who are actually just CITIZENS IN MEDICAL DISTRESS, and in NEED OF PEACEFUL HELP – not VIOLENT ASSAULT:

Failure to denounce police brutality is a failure to protect YOUR OWN HUMAN RIGHTS! And, failure to protect the human rights of even one member of society is INEVITABLY and HISTORICALLY a failure to protect them all! Let us also not forget that public intoxication and DUI’s are as much a medical issue as a criminal one. That is precisely why suspects must be DETOXED BEFORE they are charged – to be sure that they are in their RIGHT MIND to understand what they are being accused of! Clearly, if we allow police to exact gang-like “street justice” against the citizenry they are sworn to protect, then we can expect a gang-mentality to emerge from it, and for many innocent individuals to be UNAVOIDABLY caught in the cross-fire!

Rayn: Rodney King was not under the influence of any dangerous drug, other than alcohol! That was an INCORRECT ASSUMPTION BY POLICE! There were also traces of cannabis in his blood stream, but there was NO, and I repeat, NO PCP, cocaine, or opiates in his system. Read for yourself:http://www.nytimes.com/1993/01/22/us/rodney-king-testifies-about-night-of-beating.htmlBesides, this is absolutely IRRELEVANT to King being beaten by police while lying prostate and supine! How do you connect these events? And, why should the police punish King with beatings for speeding? That is “cruel and unusual punishment”! Let the COURTS decide such punishments, with their prisons, and their probation, and their fines! The video PROVES that King could have been CUFFED a MILLION TIMES OVER!!!!!!!

Rayn: Their incorrect assumption about Rodney King by police is PRECISELY WHY they are NOT JUDGES of the law, but simply UPHOLDERS of the PEACE! They have NO RIGHT to work outside of their JURISDICTION!

Tony K.: Rayn, I pretty much agree with everything you said about the dangers of police brutality and how we have to hold the line on it. I just think you’ve chosen the wrong poster boy for it. Even if, as you say, it was alcohol and NOT a dangerous drug as I was led to believe, that is bad enough. I know two people in my very limited sphere of influence who have been killed by drunk drivers. King was a menace to society on that fateful day (which, for him, was like winning the lottery) and the police did you, me, and society at large a huge favour by doing everything they did to get him off the road.

Rayn:  I didn’t choose Rodney King as a poster boy. YOU chose him as an excuse to justify not the conclusion of excessive force in a video of a HANDCUFFED suspect being brutalized with a tazer – in the absence of a deadly weapon, or serious strikes against officers. I found that line of thinking to be questionable, and laid out my reasons. Also, I found no fault in the police decision to “get [King] off of the road.” It was their subsequent brutalization of him with night sticks, while he was lying prostrate, then supine, in lieu of handcuffing him, that I found SUSPECT!Rest assured that the police did me NO FAVORS when they BEAT KING. For one, it only INCREASED the level of police brutality in America, as cops felt that much safer to commit criminal acts against suspects, without fear of reprisal! Two, it created unnecessary ethnic tensions in the US, when three of the four officers were originally acquitted. And, three, it was with US citizens tax dollars that King was paid for his damages, as well as his court cases! So, forgive me if I won’t be thanking the lizard cops for their criminality!Menace or not, REAL PEACE OFFICERS don’t have the jurisdiction to punish suspects for their alleged crimes, as they are not judges of the law! It is PRECISELY the fallacious idea that police can beat a “guilty” suspect, or a “DUI suspect” or a “fleeing suspect” that has resulted in an outbreak of police brutality against those in medical distress, as I showed in the videos linked above!And, how on EARTH is receiving 11 skull fractures, and sustaining permanent brain damage like “winning the lottery”? That’s wildly ludicrous. The city couldn’t pay me enough to endure such an end! That’s a STRETCH, if I’ve ever heard one!

One Response to Withhold Judgement When Unarmed, Non-Combative, Handcuffed Suspect is Tased by Police, or Immediately Demand Justice?