Peace is a Human Right!

The following debate originally took place upon my Facebook wall, after I posted artwork being shared by the page, “American Peace Cooperative“… 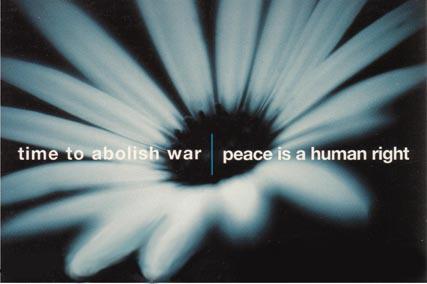 “Time to abolish war. Peace is a human right.”

Rayn: Self-defense is a human right. “War is a racket.” –Smedley Butler

Rayn: War is a way of shattering to pieces, or pouring into the stratosphere, or sinking in the depths of the sea, materials which might otherwise be used to make the masses too comfortable, and hence, in the long run, too intelligent.” – George Orwell

Rayn: By that reasoning, slavery comes from “us.” Does that make it a human right, as well?

Brian J.: We should only go to War, if both countries agree to it. Lol! 🙂

Brian J.: It’s why I’m only for the death penalty, if the prisoner makes the decision to be executed. Which do you want? Life in Prison, or lethal injection? Lol!

Rayn: “We should only go to War, if both countries agree to it,” you say? That sounds like mob rule, to me! Call me Bartleby! “I would prefer not to!” I’ll will retain my Self-Ownership under the The Non-Aggression Principle, instead! 😉

Brian J.: And I’ll admit it, war is apart of our nature. We can’t get rid of it, we can only marginalize war, and bring it down a minimal.

Brian J.: And it is possible, for human beings to change our nature. A lot of us don’t want to admit that, but other creatures have done it. I think we could do it as well.

Rayn: Just like terrorism, war will never be completely eradicated from the face of this earth. And, that is exactly why a “war or terrorism” is illogical, and completely misguided. But, on the other hand, we must never stop fighting for the justice of peace, or else we will walk the slow road to tyranny and pathocracy!