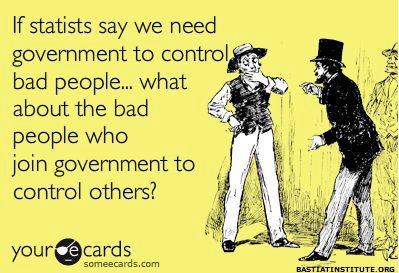 My Commentary: The centralized governments of the world empower the same criminals they claim to protect their citizens from. These predators, in turn, legalize their criminality, while criminalizing our humanity. And, apparently, as we attempt to destroy this parasitic relationship using the poison of TYRANNY, it only adapts to the new environments we create for it, while we weaken ourselves for an even worse infection! Now is the time for us to use the elixir of true FREEDOM to heal and rid ourselves of this Beast system! Let the way we live actually reflect reality, with EVERY Individual speaking in their own unique voice! Embrace the EQUALITY and JUSTICE of Individual Sovereignty, which logically, peacefully demands our adherence to the The Non-Aggression Principle, and opens the door to Voluntaryism!

(note: though I previously shared a Philosoraptor meme version of this quote in April of 2012, within my post, “Critical Thinking: The Original ‘Check and Balance’!,” I still felt compelled to offer up an alternative commentary when I saw it again, due to the inspiring nature of this artwork)