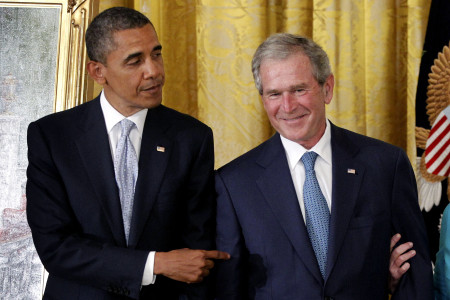 President Barack Obama points to former President George W. Bush during a ceremony to unveil his official portrait, Thursday, May 31, 2012, in the East Room at the White House in Washington. (AP Photo/Charles Dharapak)

Jeb Bush Recommends Obama Give ‘Tip of the Hat’ to Brother on Foreign Policy:
http://thehill.com/video/campaign/231441–jeb-bush-recommends-obama-give-tip-of-the-hat-on-foreign-policy-to-brother-

(The Hill, Geneva Sands) “I would argue that in some ways that by reality kind of seeping into his life as the commander-in-chief that a lot of it’s modeled after … 43,” Bush said in an interview with CBS’s “This Morning” host Charlie Rose.

“A little tip of the hat might be a nice thing,” Bush added.

Bush also argued that recognizing the positive influence of his predecessor would be politically helpful for Obama.

One Response to Bipartisan Bankster Puppets, United in War Crimes