The following correspondence originally took place on my Facebook wall, upon my post, “Under Obama, the American Government’s Crimes Against Humanity Continue“…

Rayn: PLACE HEAD IN SAND, AND REPEAT AFTER ME: Those who don’t agree with Obama’s policies are OBVIOUSLY just racist. 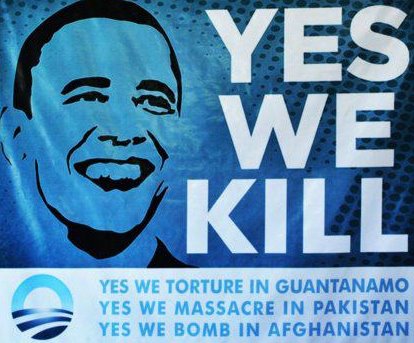 Jason R.: What about Mitt Romney?

Charles C.: but how come the “terrorist” get better lawyers then regular amaricans

Rayn: I won’t hesitate to verbally tar and feather that Death-Worshiping mummy, either, Jason, if he becomes a serious enough threat. He’s just ANOTHER War Pig, foaming at the mouth for murder. He and O-bomb-a are guilty, and the blood of the innocent is on their hands, along with any who support them. I will not be led by the Cains of this world – nor the Barabbas’, nor the Shauls. Let THEIR sons follow after them, and let the dead bury the dead.

I’m not sure that I would classify their legal representation as “better,”Charles… Many of America’s “terrorist” suspects have been treated in ways that are technically considered WAR-CRIMES by the standards of Human Rights – and EVEN, as defined by the Geneva Convention! And, this has happened under both Bush and O-bomb-a’s administrations.