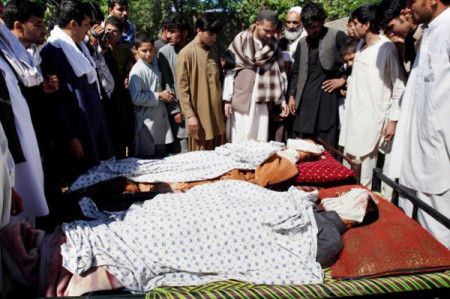 The attack, which took place Friday night, was first revealed by the governor of Helmand Province, Muhammad Gulab Mangal, on Monday. His spokesman, Dawoud Ahmadi, said that after an investigation they had determined that a family home in the Sangin district had been attacked by mistake in the American airstrike, which was called in to respond to a Taliban attack.

My Commentary: Just another day of business for the Empire…

Questioning the Motives Behind the American Invasion of Afghanistan:
http://acidrayn.com/2009/12/18/questioning-the-motives-behind-the-american-invasion-of-afghanistan/