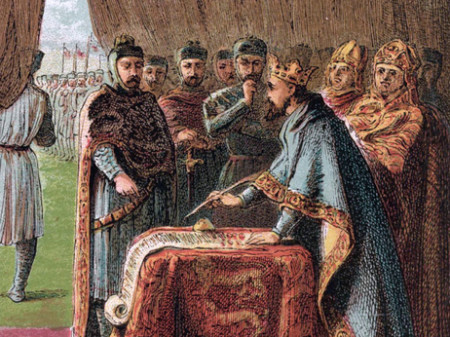 The barons wanted King John to stop seizing their grain

(Sarah Zielinski, NPR.org) Imagine it’s England, 1209, and you’re a wealthy baron. You arrive home from London one day to discover that King John’s minions have once again raided your stores of grain. It’s the king’s right, of course — he has a large household and armies to feed — and there’s a promise of compensation.

But all too often that payment arrives late, if at all. And there was that incident last year where the bailiff was caught selling the seized goods instead of handing them over to the king’s men.

These events aren’t simply the makings of the next Robin Hood movie. The practice of seizing food for the king, known as “purveyance,” was common in medieval England, as was the greed and corruption associated with it. It was one of the key gripes that drove England’s barons to negotiate the Magna Carta with King John in 1215.

My Commentary: Another empire with a food monopoly – just like ancient Egypt. Read the headlines about the raiding of free-range and raw milk farms in America, and you will see that we are heading down the same path of incremental tyranny. GMOs are the next step, since they are patented, and also wipe out all non-GMO life in the same area. This applies to crops and wildlife alike, even fish like salmon. Patents on life forms are the beginning of the end of this great experiment we call America. Even large swathes of human DNA are being patented right under our noses, as I write.

It’s globalism, in full effect! Yet, the solution to bad government has never been to create a world-wide monopoly on government, so that we have nowhere to escape (and, incidentally, no government to compare the bad government with in order to prove that that it sucks).

Let us no longer repeat the mistakes of the majority of humanity’s ancestors! We CANNOT NEGOTIATE WITH THE FINANCIAL TERRORISTS OF THE WORLD! We must SECURE OUR OWN LIBERTY in JUSTICE! Let us declare SOVEREIGNTY from ALL FORMS of SLAVERY!