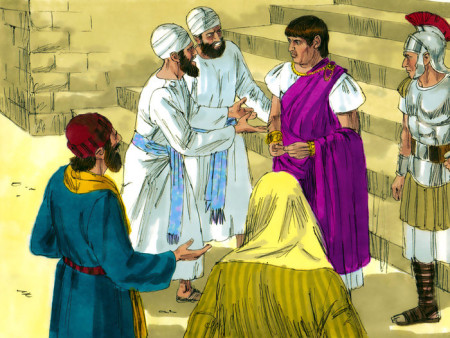 “A match made in Sheol”

Yahuchanan 19:14-17: Now it was the preparation of the PASSOVER; it was about the sixth hour. (15) And [Pilate] said to the Yahudim, Behold, your King! (16) But they cried out, Away with him, away with him, crucify him. Pilate saith unto them, Shall I crucify your King? The chief priests answered, We have no king but Caesar. (17) Then delivered he him therefore unto them to be crucified. And they took יהושע, and led him away.

Now, THAT’S TEAM-WORK! The Roman Authority and the Rabbinical Order WORKING TOGETHER, OPENLY – HAND-IN-HAND! ❤ A MATCH MADE IN SHEOL! ❤

Remember: After being condemned by the LAWS OF MAN, יהושע WAS murdered by a COMBINED government effort ON PASSOVER, which was a SHABATH – the LAST day of the week – NOT on “SUNDAY.” “Sun-day” is the FIRST day of the week, deemed holy by the Roman Catholic Church, NOT by the Word of the יהוה!

No matter how much humanity clings to the EMPTY TRADITIONS of the MYSTERY RELIGIONS that they, themselves, create, in their own vanity – the HOUSE OF WISDOM WILL ALWAYS PREVAIL over the HOUSE OF BONDAGE!