An Unforgettable Birthday of Scriptural Proportions! 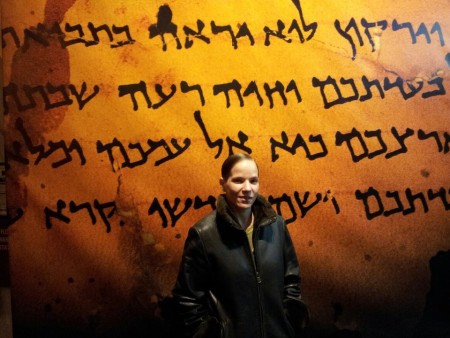 Photo taken by my husband, on February 22 (my birthday), right before we entered the Dead Sea Scrolls Exhibit, within the Discovery Times at 42nd Street, Times Square, in New York City, New York

In an awesome moment of synchronicity, the two partially obscured words directly behind my shoulders, when converted from Late Semitic Script to modern Hebrew, read as follows:

This is translated as:
“and, [His] Set-Apart Name”

These words represent a portion of the following sentence:

Translation:
“And, His Set-Apart Name is invoked over you”

I find this intriguing because right after my husband completely surprised me with the news that we’d be attending the Dead Sea Scrolls exhibit for my birthday, on the morning of, all I could think about was how amazing it was that we were going to be seeing and reading the Set-Apart Name of our Creator, “יהוה” [HE IS] (as first revealed to Moshe at Mt. Horeb) from the actual original copy of one of the oldest known Hebrew manuscripts of the TaNaKh in existence, with our very own eyes!

Once we arrived, I repeatedly accomplished my goal with the utmost ease, as His Name, “יהוה” [HE IS] somewhat stood out because it was written exclusively in middle Paleo-Hebrew throughout a number of the scroll fragments on display, rather than the Late Semitic script expected of the period – of which all the surrounding words in these particular scrolls were ascribed. This is a strong indicator that the individuals who penned these scrolls copied their works from an even more ancient set of source documents.

Meanwhile, the three words directly above my head read:

Translation:
“for Al is with you”

“Al” is a Northwest Semitic word, meaning “strong one.” It is the proper name of the Father of all Canaanite dieties, and represents one of many Babylonian ways adapted and mainted by the Hebrew tribes. “Al” is actually a shortened version of the word “ayil,” meaning “a ram (from it’s curved and twisted horns),” which, in turn, came from the root word, “uwl,” meaning “to twist (or roll) and (by implication), be strong.” Interestingly enough, “Al” was derived from the Sumerian word “lil,” meaning “loft” (typically used in the second half of the name, “Anlil,” or “lord of open/wind”).

The Hebrew tribes used the term “Al” (and, more specifically, “Alahym”) as a title to identify the Creator of the Entire Universe, long before His True Name was revealed to forever be “יהוה” [HE IS] at Mt. Horeb (the same place and time that His Self-Possessive Character(s), “אהיה אשר אהיה” [I AM THAT I AM] is also revealed). The term “Al” continued to maintain popular usage even after this revelation, even being included within some of the most important Hebrew terms of all – such as Yasharal [“Israel”], for example, which most accurately means “contends with Al” when understood in context of the TaNaKh’s story of Yacob and Asau.

The word “Alahym,” which is used almost 2,600 times throughout the TaNaKh, can best be translated as “Spiraling, Strong, Invisible Spirit.” It is a pluralization of the word “Aluah,” which means “dieties,” or “spirits,” and is expanded from the word, “Al,” which is utilized alone only about 250 times in comparison.

The words in the photo are from fragment 1, column II (4Q285 1) of the “Sefer ha-Milhamah,” (or, “Book of War”), within the Dead Sea Scrolls. The entirety of the four verses behind me (the width of which have been cut out of the picture frame), are as follows:

Translation:
(12) nor will one be sick; drought and blight will not be seen in its harvests;
(13) [there will be no disease] at all [or stum]bling blocks in your congregation, and wild animals will vanish from
(14) [the land. There will be no pesti]lence in your land. For Al is with you and [His Set-Apart]
angels
(15) [are] in the midst of your community. And His Set-Apart Name is invoked
over you

I found a few portions of these tranliteration, here and there, directly through web searches, but out of necessity and a strong desire, I had to work out a number of them for myself. Others, I discovered by combining information from Strong’s Concordance together with an online, color-coded interlinear version of the TaNaKh that I’m very fond of, located here:

These transliterated words are the last four lines of a larger portion text, which can be accessed here:
http://www.discoverytsx.com/userfiles/image/gallery/7/orig/102711-RS-DEADSEASCROLLS–1-of-61-.jpg 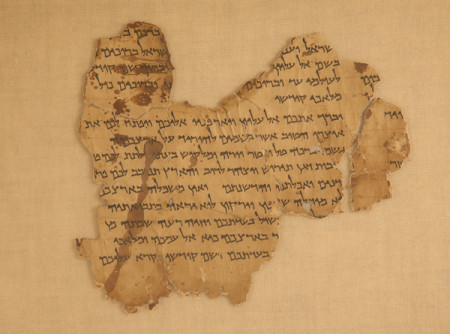 A transcription of the entire fifteen lines within this portion of the Dead Sea Scrolls can be found on pages 1210-1211, along with a translation – although, no transliteration is provided:

(update: because this link has since become inactive, here is an alternative:
http://www.bibliotecapleyades.net/scrolls_deadsea/uncovered/uncovered01.htm)

I merely have a very deeply-rooted, life-long special love-interest in Our Creator, His Name, His Character, and His Creation. I do my best to understand, speak and walk in His Laws of Creation and Peaceful Co-Existence, which almost exclusively form the basis of what are commonly referred to as “Individual Sovereignty” (AKA “Self-Ownership“), the “The Non-Aggression Principle,” and “Voluntaryism.” Because of this, much of my personal studies research revolves around written works of philosophy, politics, law and religion – both current and historical – that explore these topics in depth.

My ultimate desire is to completely emancipate my entire being from the House of Bondage, built upon the laws and traditions of man, by fully embracing the Truth, Wisdom, Humility, Compassion, Self-Sacrifice, Free-Will, and Justice of Our Creator, יהוה [HE IS], His Law, and the Way of His Son, יהושע, as Mashiach. In order to successfully do this, I am slowly but surely learning the TRUE meaning of the Hebrew Aleph-Bet, as well as the words of the TaNaKh, and the B’rit haChadashah, which Greek and English translations have painstakingly, purposefully and purposely obscured!

*(many translate this important word into “holy,” which totally obscures the beautiful and fully-revealed simplicity of its meaning, turning it into just another mystery)