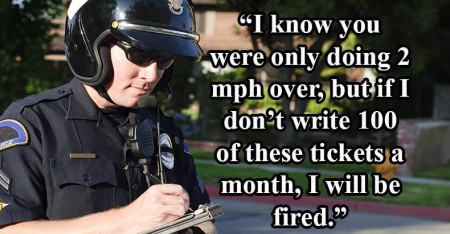 Genaire: Must be quota time in NJ. The highway state pigs – oops, I mean “troopers” – are out in force fucking with people.

Terrence B.: Oh stop it! They got too work too. Smh! If not idiots would be dropping the needle then what? Lol

QUOTAS were already established as UNCONSTITUTIONAL by the American court system. Therefore, if an officer is given “orders” to engage in such criminal activity, it is his DUTY as a CITIZEN FIRST, to REFUSE, and then FILE A COMPLAINT against his superior! Attempting to claim job security as an excuse for violating our civil rights is just a pathologically pathetic EXCUSE for TYRANNY!!!

Genaire: Stopping crime and revenue generation are two different things. We pay these people through our taxes to keep us safe, not to tax us further for going a few miles over the bull shit speed limit.

In Germany where they have a much higher speed limit they also have fewer fatal car accidents.

Terrence B.: That’s Germany go live over there. Lol lil bro I love you but we are on two different wavelengths with our views in life..lol

Genaire: That we do and that’s what makes America great or atleast until the government figures out a way to tax those differences.

Rayn: The “Love it or Leave it” argument is a DEBATING FALLACY known as the FALSE DICHOTOMY. There are almost ALWAYS more than just TWO CHOICES! To believe otherwise in matters of such complication is an EXTREMIST MINDSET, and really only serves as an excuse for maintaining the status quo. As a matter of fact, in the definition below, the VERY FIRST EXAMPLE used is the “love it or leave it” farce:
http://www.sjsu.edu/depts/itl/graphics/adhom/dilemma.html

Here’s some food for thought, to bring my point home: In the 1800s in America, slave abolitionists were REGULARLY told to “go live in Europe, then” when informing slavery sympathizers that the European nations had begun to outlaw slavery on a mass scale.