Democracy, or a Constitutional Republic?

Thomas Paine’s FB Page: The Sun never shined on a cause of greater worth 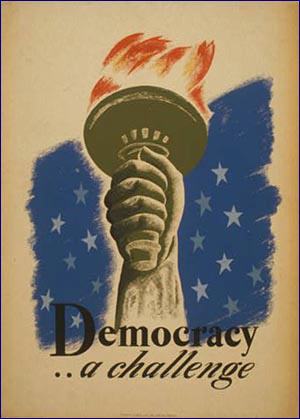 Jan Paulson: That’s funny??? Neither my copy of the Declaration of Independence nor my copy of the Constitution mentions anything about a Democracy… they keep refering to A REPUBLIC!!!!!

Jason Gade: There is no significant difference between a democracy and a republic, unless you are being a nitpicking asshole.

Rayn: Good point, Jan! I was thinking that very same thing! To America’s Founders, pure “Democracy” was the dangerous legalization of 51% mob rule, while a “Constitutional Republic” sought to protect the Inalienable Rights of the Citizenry, as established by the Constitution, regardless of the will of the majority.

So, rest assured that making such a distinction is a far cry from being a “nitpicking asshole.” 🙂

“Democracy is not freedom. Democracy is two wolves and a lamb voting on what to eat for lunch. Freedom comes from the recognition of certain rights which may not be taken, not even by a 99% vote.” – Marvin Simkin

Jason Gade: Yes, but it’s not the 18th Century any more. Not all democracies are “pure” democracies that the founders feared, almost all are “representative democracies”, which are exactly Republics.

You can nitpick it all you like but it adds zero to the conversation. Especially when you pollute your definition with stupid cliches.

Rayn: I never said it was the 18th century, Jason, so I’ll just dismiss your strawman, and point out that neither a “representative democracy,” a “direct democracy,” or even a “republic” intrinsically imply the use of a Constitution. And, without a Constitution in place to protect INALIENABLE NATURAL RIGHTS of the Individual, ALL of the aforementioned systems are subject to mob rule – which is LEGALLY permissible. The “Constitutional Republic” acknowledges the tyranny of the majority, and attempts to restrain it. That is CLEARLY a SIGNIFICANT DIFFERENCE! THIS was my point, and it still is! You can rest assured that your ad-hominem attacks (“asshole,” “stupid”) will not cause me to lose focus of the concept, and I will repeat myself, as necessary. Such small-minded responses add LESS than “zero” to this so-called “conversation,” and only reveal how over-emotional and intolerant you are of viewpoints not your own. So, cherry-pick away at my words, if you must, and I will simply repeat myself again. 🙂

By the way, my quote must have been REALLY cliché, since the original meaning seems to have eluded you so greatly…

I apologize if my ad-hominem attacks hurt your feelings. If you would like a tissue I’ll be glad to give you one.

If I have come across as “intolerant” then I apologize to you in that I could have refrained from being so inflammatory. The fact is, I’ve seen this argument posted so many times and it is definitely one of my hot-button issues.

Now, for the future if you want to continue to argue that there remains a difference between the two terms, you could at least reference James Madison in the Federalist Papers #10, #14, and #48. That would at least give your argument some historical legitimacy (even though I would still disagree with it since Madison was still clearly referring to direct democracy and not representative democracy). Good luck with that!

“Government without a Constitution is power without a right.” (photo originally located here, on LibertyStickers.com)

Your personal attacks had no emotional effect on me, so you can save your tissue for whoever it is you’re trying to make cry. I’m not easily moved by unsolicited, personally-directed anger… especially from strangers. I simply found your words distasteful, and your reason for using them, fallacious.

Perhaps the word “democracy” has become a “stupid cliché,” to use your phrase. Therefore, let’s re-inject some meaning into the AMERICAN VERSION of the idea by celebrating the fact that we are a CONSTITUTIONAL REPUBLIC, first and foremost. This must be understood and respected in order to be maintained! And, we should always keep in mind that a REPUBLIC is OF “the people” and BY “the people,” while a DEMOCRACY is BY “the people,” but NOT ALWAYS OF “the people.” In the end, knowing the difference between them, and their overlaps, helps keep perspective of things.

One Response to Democracy, or a Constitutional Republic?