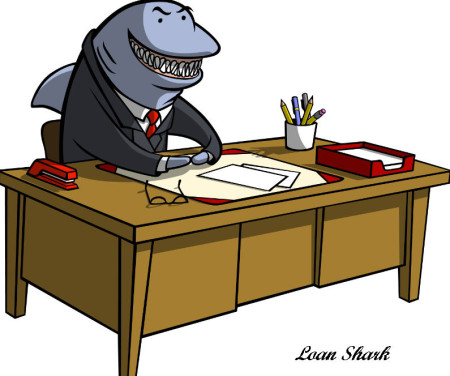 Genaire: Here’s an example of Obama’s credit card reform. You can get a better deal from the Mafia loan sharks.

Unay U.: i don’t think that was the intention of the reform. this appears to be based on some scrupleless expoloitation of a loophole

Genaire: True fix it is what I say.

Genaire: But i bet they wont 🙂

Unay U.: the fix is in the people. we need to exert our power.

Genaire: I agree. We need to make informed choices at the polls and actually pay attention to what these pigs are saying at the presidential debates.

Rayn: A Nation of Sheep Shall Be Ruled By Pigs 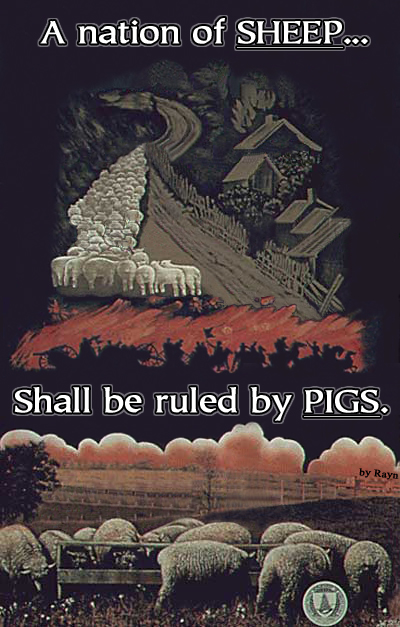 “A nation of SHEEP…
Shall be ruled by PIGS.”
(Artwork by Rayn, and originally located here)

Unay U.: we need to pay attention to how we use credit & not rely on it as much & live w/in our means. the government can’t fix our individual attitudes about money. as a nation we don’t have to rely on credit cards the way we do. we’ve given these credit cards way too much power over us. we need to take it back. if aprs are lower & ppl still deal w/credit the same way. we need to make the change. the people, not the government.

Genaire: This countries debt has very little to do with anything we as a people have done. Before Clinton got rid of the Glass Steagall Act the bank could on leverage the cash they had on hand at about 10 to 1 after that they made up an unlimited amout of money money in which they didnt have so they should not have been allowed to lend money they didnt even have on hand. Like gambling with money you dont actually have then they go to the governement and ask for a bail out on the poor bets they made.

Rayn: American citizens have been debt-slaves since at least 1913, and we haven’t even finished paying what we owe for our involvement in WWI! Our government can’t fix our money problems, because they are the ones that broke it in the first place! Congress handed over control of our money to a private banking cartel almost a CENTURY ago!

Genaire: Now the governemt decides to fix the problem by printing more money which causes inflation which makes the poor that much poorer.

Unay U.: do u mean our national debt or our individual debt?

Unay U.: Rayn – that’s what i’m saying. we need to take back that living out of our means mentality. we can’t rely on the government bc they don’t give a eff about us. the whole system is broken. they’re in bed w/corporate America. how can i rely on them for anything. there would actually need to be a revolution in the country to change the government & it wld mean more than voting. the corporations make their money off of us, & the gvt is part of the corporation so we need to control the way we use our money to topple the corporations.

Unay U.: like imagine if every person – not even rich, but just every average person took our money out of banks at the same time. we need drastic measures like that. we have the power, but we don’t exert it.

Genaire: I agree with you Unay but i also feel alot of this can be changed if we make informed choices at the polls. Alot of this shit would change if the current memebers of congress was voted the fuck out for not doing the jobs they have been elected to do.

Unay U.: Genaire – i mean our individual debt. the banks are living fat off of us. the deregulation defintely didn’t do us any good, but bush did that & let the banks go wild. how do u reign that in? too many members of congress & the house are corrupt. it’s up to us – yes we need to vote for better repesentation but we the people need to move too

Unay U.: we just posted at the same time LOL

Genaire: Most Americans are anti war yet they vote for a president that if you actually listened to at the debates said he was going to continue war in Afganistan.

Genaire: I know i personally want to pay off all my bills but the way the system is designed they make it really hard. they tax the shit out of us at every turn which makes it really hard to pay any bills. Thank god ive been doing better finacially but even with me making double what I have in previous years its still a stretch.

Unay U.: yes the system is designed to keep us in debt. along w/the bank thing – if we all said fuck them & stopped paying everything what would they do? put us all in jail? why didn’t the bailouts forgive the debt of the ppl who owed the banks that were bailed out? so they get the bailout money & still get to get pmts from us? that’s BS! billion dollar bailouts & now the govt is about to shut down WTF? we need to go back to living off the land. i grow tomatos, u grow potatos & we trade bc this current system is all fucked up.

Rayn: The thing about all of this is that MONEY=DEBT NOTES. On the other hand, CURRENCY=VALUE. And, as the Sovereign States have given up their right to create CURRENCY long ago, we have since been flooded by the Federal government with worthless, paper MONEY. WE, as citizens, have been HOOKED into a GIGANTIC PYRAMID SCHEME run by an off-shore banking cartel. There is no way out of bottomless pit of debt unless we REVOKE the CHARTER OF THE INTERNATIONAL PRIVATELY-OWNED, FEDERAL RESERVE! Without enacting this step, it doesn’t matter whether you owe thousand of dollars, or if you own millions – the bankers can ALWAYS destroy our entire economy in a SINGLE DAY, either by refusing credit, or calling in government loans, during a time of war, or, even by printing massive quantities of reserve notes – all without touching a single personal loan, or credit card account!

Genaire: Unay, thats Awesome about the tomatoes. Me and Rayn have decided to but a bus sized RV cause we dont want to pay property tax for the rest of our lives.

Unay U.: Rayn – powerful point. that’s why i want to buy my own land & grow my own food, use solar &/or wind power. i just want to be off the grid. of course then those bastards can enact eminent domain whenever they want to & take my land away.

Rayn: I agree, Unay. We plan to buy land without the house for that very reason: food, and solar panels, with no way to make us homeless. An RV can be moved, and truly owned, so that will be the route we take.

Unay U.: that’s a great plan. i want an RV but i never thought about it being a permanant residence but that’s surely a good idea, cuz like u said u’d truly own it.

Genaire: take a look at this:
http://www.crowleyrv.com/Inventory/inventory_details.php?id=RV16350A&lot=157519

Unay U.: i’m looking at it now. i love rv window shopping. i’ve been on a few sites daydreaming :)G but i’m getting one!

Genaire: Its almost like paying off a house they give you 15 years to pay it off. Diesel engines can have well over 500,000 miles on them with no need for extensive service.