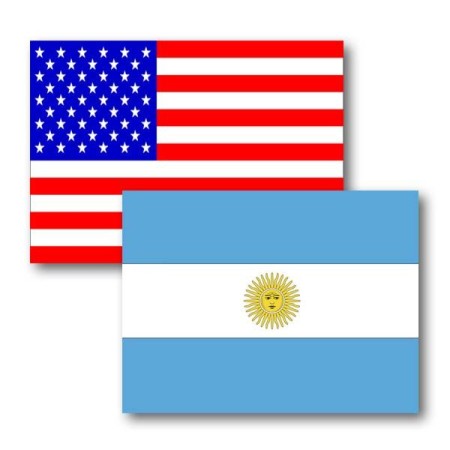 United States in Argentina in Diplomatic Spat of US Gun-Running

Argentina and US in Diplomatic Spat:
http://www.smh.com.au//breaking-news-world/argentina-us-in-diplomatic-spat-20110215-1au1u.html

Argentina and the United States are engaged in a diplomatic spat after Buenos Aires authorities seized what they say are undeclared weapons and drugs on a US military aircraft last week.

The Argentine government on Monday said it planned to lodge a formal protest with Washington, while the US State Department said it was “puzzled and disturbed” by the seizure of what it claimed was routine equipment for training the Argentine federal police.

Officials in Argentina said the US Air Force C-17 transport plane was searched and its cargo seized by customs officials on Thursday at Ezeiza International Airport after arriving with experts and material for a hostage rescue training exercise.

In a statement late Sunday, President Cristina Kirchner’s government said it would lodge a protest with Washington and ask it to cooperate in a probe into the air force’s attempt “to violate Argentine laws by bringing in hidden material in an official shipment.”

My Commentary: According to the article, “the US State Department said it was ‘puzzled and disturbed’ by the seizure of what it claimed was routine equipment for training the Argentine federal police.

Yeah! I’ll bet! And, from the looks of the inventory that was seized, I have a pretty good idea where these Federales were being “trained”!

School of the Americas:
http://en.wikipedia.org/wiki/Western_Hemisphere_Institute_for_Security_Cooperation

Created by our own Department of Defense, financed by our tax dollars, this facility has been a LITERAL TRAINING GROUND FOR South America’s most notorious TERRORISTS! Shamefully, our Latin neighbor’s MOST EGREGIOUS human rights violators, including DICTATORS, DRUG SMUGGLERS & CORRUPT POLICE OFFICERS, graduated from THIS SCHOOL! Framed photoes of more notorious graduates, like Manuel Noriega and Augusto Pinochet, line the halls of the school, to CELEBRATE the grisely “achievements” their names carry!

Notorious School of the Americas Graduates from Argentina:
http://soaw.org/index.php?option=com_content&view=article&id=230