New Details Emerge on CIA’s Use of Nazi War Criminals 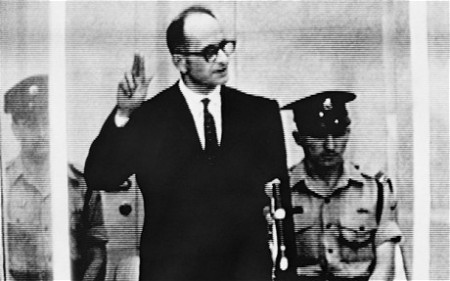 (New York Times) The Central Intelligence Agency took no action after learning the pseudonym and whereabouts of the fugitive Holocaust overseer Adolf Eichmann in 1958, according to C.I.A. documents that shed new light on the spy agency’s use of former Nazis as informers after World War II.

The C.I.A. was told by West German intelligence that Eichmann was living in Argentina under the name “Clemens” — a slight variation on his actual alias, Klement — but kept the information from Israel because of German concerns about exposure of former Nazis in the Bonn government, according to Timothy Naftali, a historian who examined the documents. Two years later, Israeli agents abducted Eichmann in Argentina and took him to Israel, where he was tried and executed in 1962.

The Eichmann papers are among 27,000 newly declassified pages released by the C.I.A. to the National Archives under Congressional pressure to make public files about former officials of Hitler’s regime later used as American agents. The material reinforces the view that most former Nazis gave American intelligence little of value and in some cases proved to be damaging double agents for the Soviet K.G.B., according to historians and members of the government panel that has worked to open the long-secret files.

My Commentary: Be sure to fully research “OPERATION PAPERCLIP” in order to understand the complex and cozy relationship between our government and certain outlaws within the Nazi party after World War II. Learn how the CIA used American tax dollars to hire full-blown Nazi war criminals to positions of power, placing them on the government payrolls under assumed identities. And, our government not only helped certain Nazis escape prosecution, they also falsified immigration documents for them, and even whisked some them to safehaven within the United States and South America!