Man-Made Laws Are False, Contradictory, Unfair and Adversarial to Individuality!

The following correspondence originally took place upon the Facebook wall of my friend, Matt K… 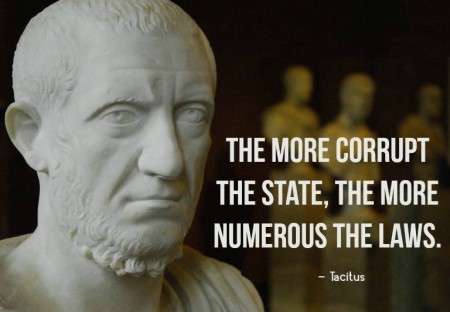 Matt K.: If there is no victim, why is it a crime?

Rayn: Because the man-made laws we are subject to are completely false, contradictory, unfair and adversarial to INDIVIDUALITY! Under them, we are ALWAYS GUILTY, until PROVEN INNOCENT!! For example, even our so-called “legal” OBLIGATION to carry ID in this country is because we are ALL being ACCUSED of IDENTITY THEFT, and must therefore PROVE that we ARE who we REALLY ARE!

In reality, our current “legal” system is the equivalent of stacking more excrement onto a gigantic pile of excrement! The more this system blatantly fails us, the harder it works to cover it’s errors, and feign present perfection, refusing to relinquish the unwarranted POWER that they have usurped over our INDIVIDUALITY! Our system can best be symbolized by a snake eating its own tail – also known as an ouroboros!

For example: as so very many individuals lose their life savings and homes under this current manufactured economic crisis, our “government’s” solution is to give the police and military more money than ever, so that they can enforce our poverty, as well as global poverty, by gunpoint!!! The COWARDS-THAT-BE know that their PARASITIC SYSTEM of SLAVERY is a PURE FAILURE, but, instead of GIVING UP ON THEIR LOFTY GOALS, WE ARE TREATED TO A MORE AND MORE OPPRESSION!!!

Once you know what to look for, you can begin to see that TYRANNY IS THE EVIDENT END-GAME in every “LAW” that is made. We are being incrementally stripped of the FREEDOM WE WERE BORN WITH, PIECE BY PIECE!!! Remember the words of the Ancient Roman, Marcus Cicero: “The more laws, the less justice!”

Almost EVERY SINGLE PERSON I know is morally superior to the politicians that “RULE” over us!!!! Obviously, SOMETHING IS WRONG WITH THIS EQUATION!!!! Our government may claim to protect us from criminals, but I know of NO CRIMINAL in the HISTORY OF THE WORLD that HAS BEEN ABLE TO LEGITIMIZE THE ONGOING DAILY THEFT of 30% of AN ENTIRE NATION of INDIVIDUAL PAYCHECKS!!! Our government has also LEGALLY murdered MORE INDIVIDUALS THAN ALL OF THE MURDERERS that have ever existed in our country, combined!!!

Individuals may BELIEVE that we need protecting from ourselves, but every system that we make to fulfill this goal becomes an INSTRUMENT OF TYRANNY, and a means for legitimizing the criminal actions of the same sociopaths and psychopaths that we were supposed to be protecting ourselves from! Their diseased minds are drawn to power sources, and NEEDING TO BE NEEDED, and most individuals, in their ignorance, DOUBLE-THINK, and willingly prostrate themselves before these PARASITES, believing that while we cannot be trusted to govern ourselves, somehow, certain individuals can be trusted to govern others!!! It is simply mass delusion!!!

Understand in your heart that the 10 + 2 Commandments are the ONLY LEGITIMATE LAWS that exist, and then YOU WILL FINALLY BE FREED FROM THE HOUSE OF BONDAGE! No man can call himself your “leader” once you realize that the 10+2 are just, fair, perfect, and the ONLY RULES WORTHY OF PLACING FAITH IN! This is the ESSENCE of INDIVIDUAL SOVEREIGNTY and EQUALITY! SELF-FREEDOM in TRUTH, and RESPECT FOR THE FREEDOM OF ALL OTHERS! The only one you ever have to answer to is the “I AM,” which is inside each of us, and also, all around us. “Everything else is damned, let them with ears understand”!!!!!!!

Believe me when I say that this concept nothing to do with “RELIGION” (another man-made means of controlling the masses), and everything to do with TRUTH!!! The “I AM” PROVABLY EXISTS, and to deny it is to deny the “SELF,” as well as the “EXISTENCE” of all “SENTIENCE”!

Matt K.: thanks Rayn. That about answers my question…

Rusty T.: I was just going to say “because it pays”…

Matt K.: I got some friends who like to stay HIGH,
Think of, the tax potential,
if it was legal to buy.
But instead the heat is forced,
to bust on victimless crimes,
It’s a low class bust for nickels and dimes,
It’s not the crime,
and it’s not the thought,
It’s not the deed,
It’s if you get caught.

Rayn: Thanx for reading my response, Matt! And, that’s a sweet poem! I LIKE IT! Did you write it?

Matt K.: an old favorite from Tower of Power
http://tinyurl.com/yc9onyv