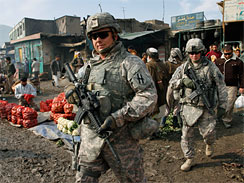 (Tom Engelhardt, CBS) In his Afghan “surge”speech at West Point last week, President Obama offered Americans some specifics to back up his new “way forward in Afghanistan.” He spoke of the “additional 30,000 U.S. troops”he was sending into that country over the next six months. He brought up the “roughly $30 billion”it would cost us to get them there and support them for a year. And finally, he spoke of beginning to bring them home by July 2011. Those were striking enough numbers, even if larger and, in terms of time, longer than many in the Democratic Party would have cared for. Nonetheless, they don’t faintly cover just how fully the president has committed us to an expanding war and just how wide it is likely to become. Despite the seeming specificity of the speech, it gave little sense of just how big and how expensive this surge will be. In fact, what is being portrayed in the media as the surge of November 2009 is but a modest part of an ongoing expansion of the U.S. war effort in many areas. Looked at another way, the media’s focus on the president’s speech as the crucial moment of decision, and on those 30,000 new troops as the crucial piece of information, has distorted what’s actually underway.

My Commentary: “The truth is that every morning war is declared afresh. And the men who wish to continue it are as guilty as the men who began it, more guilty perhaps, for the latter perhaps did not foresee all its horrors.”
– Marcel Proust

And, with our number of active troops not decreasing whatsoever since then, Obama’s recent announcement that he will commit another 30,000 troops to Afghanistan only serves to inflate America’s wars in the Middle-East well beyond anything the BLOOD-THIRSTY BUSH ADMINISTRATION could have ever “HOPED” for!

Is this what Obama meant by “CHANGE YOU CAN BELIEVE IN”? A simple “CHANGE” in war tactics, with an absolute continuation & escalation of Bush’s illegal wars of aggression?

As I said before, OBAMA IS JUST ANOTHER BUSH!!! Whether it be his troop build-ups, his bankster bailouts, his signing statements, his funding of the wars in the Middle-East, his huge budget increases for the Department of Defense and the Pentagon, his prolonged detention of “enemy combatants” without due process, his allowance of torture and use of “extraordinary rendition” with claims of “state secrets” to obstruct justice afterwards, his renewal of the freedom-stripping P.A.T.R.I.O.T. Act, his war efforts in Pakistan, etc., Obama has committed himself, piece-by-piece, to just about every flawed policy that was initiated by Bush!